For the directive in WALL•E, see Directive A-113.

A113 (pronounced A-One-Thirteen) is the classroom number used by character animation students at the California Institute of the Arts. Many of its alumni (including Pixar staff) have used the number in their professional works. It is said to appear in some way, shape, or form in every Pixar film. Although none have been found to date on Monsters, Inc., Pete Docter mentions he believed that it was on one of the doors in a hallway inside the factory in the documentary Pixar: 25 Magic Moments. In addition to Pixar films, this running gag also appeared in some non-Pixar films, such as The Brave Little Toaster, Lilo & Stitch, The Avengers, Rise of the Planet of the Apes, Mission Impossible: Ghost Protocol, etc.

Monsters, Inc.
A113 spelled out in the stars above the Pizza Planet truck to the left and the caravan. 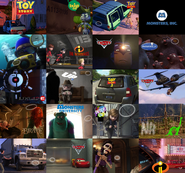 Overview of all A113's in Pixar movies so far