"Stupid wheel!"
—Captain B. McCrea, after AUTO has confined him to his quarters
"Give me The Plant."
—AUTO

AUTO is the auto-pilot of WALL•E. He is the autopilot for the Axiom. AUTO is designed to never abandon any of his directives. Although he seems to be a helpful source of artificial intelligence, AUTO is actually an automatic antagonistic machine that refuses to let the Axiom return to Earth, due to it being programmed to follow and carry out Shelby Forthright’s Directive A-113.

AUTO is a robot built by the Buy N Large Corporation and designed to function as the autopilot aboard the Axiom. Like other autopilots, he is shaped like a sailing ship's steering wheel and assists a ship's captain with his or her duties. Due to his programming, AUTO works against Captain B. McCrea, EVE, and WALL•E. His voice is also very deep.

Aboard the Axiom, AUTO ran most of the ship's functions (with the ship's computer) due to the captain's severe obesity, but also was secretly charged with enacting Directive A-113. AUTO has the secret order (Directive A-113) to never return to Earth due to the cleanup being a failure; however, an EVE unit returns to the Axiom with the plant, confirming that Earth is habitable and that the cleanup was successful after all. AUTO responds by informing the captain of the discovery, while GO-4, his subordinate, was ordered to steal the plant from deactivated EVE's internal container to make it seem like she was defective, and dispose of it in an life-pod. The captain ordered that EVE would be sent to maintenance and, upon spotting WALL•E, sends him along too.

As night fell, AUTO found the captain researching about Earth and deactivated the computer, wishing the captain a good night, but the latter reactivated the computer. But soon, AUTO is summoned by the captain, revealing that EVE had retrieved the plant and ordered that he would fire up the holo-detector for the Axiom to return to Earth. AUTO attempted to seize the plant, but this only made the captain suspicious and demanded answers. AUTO is reluctant at first, but then allows the captain to view a top secret video that Shelby Forthright sent to the autopilots 700 years before. The captain is shocked and tries to convince AUTO that things have changed on Earth. AUTO is still driven by his directive, and orders his henchmen GO-4 to seize the plant with a force-field, but EVE draws her weapon at the steward at the captain's command. GO-4 attempts to toss the plant down the garbage chute, only for WALL•E to catch it as he was climbing up the chute. As WALL•E held the plant in his chassis, saving it and refused to hand it over to AUTO, the latter wants to defeat WALL•E by electrocuting and frying his motherboard with his electricity taser, causing his charging level to drain low and sending him down the garbage chute. He and GO-4 then deactivate EVE, and send her down the chute as well before locking the captain in his room. However, a severely injured WALL•E, (with the plant still in his chassis) was saved by EVE, who rebooted her systems, and both were saved by M-O and the WALL-A's, and made it back to the upper decks. When a Steward catches a picture of EVE and WALL•E with the plant, AUTO summoned multiple Steward Bots on the ship to stop them. At the same time, the captain tried to communicate where to bring the plant before AUTO cuts him off. The captain then commanded AUTO directly, tricking him into thinking he had the plant, using the image captured by EVE's vision with WALL•E holding the plant for her. AUTO was fooled to go down into his room. The captain tries to restrain AUTO, but AUTO manages to wrench himself free by spinning his wheel, causing the Axiom to tilt, which also causes WALL•E and EVE to miss the holo-detector. AUTO then activates a button that closes the holo-detector, crushing and injuring WALL•E, who is struggling to jam it from closing. The captain manages to reach AUTO and engage him in another fight. Having had enough of McCrea's fighting, he attempts to taser him as soon as the latter calls his name for the last time. AUTO is finally defeated when the captain switches AUTO's mode from auto to manual, turning him off and "relieving him of duty." McCrea then spins the now-deactivated AUTO to straighten the ship. From now on, AUTO is just a normal steering wheel.

The artwork of AUTO 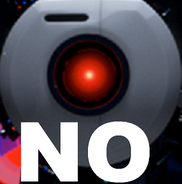 Auto fighting Captain B. McCrea from behind

Auto looking at the captain. 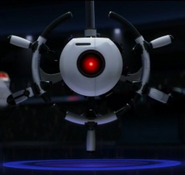