"An epic of miniature proportions."
—Tagline[3]

The plot of A Bug's Life focuses on an outcast ant named Flik who recruits a group of circus bugs to help him rid his colony of evil grasshoppers.

Ant Island is the home of a colony of desperate and peaceful ants, ruled by the wise queen and her oldest daughter, Princess Atta, whom is very timid and nervous of her responsibilities. The grasshoppers arrive once a season to extort food from the ants, supposedly in return for protection from bigger bugs. However, while working with an invention to pick grain more efficiently, a young optimistic ant named Flik accidentally destroys the annual offering that the ants were collecting to appease the grasshoppers. In exchange for a temporary reprieve from the grasshoppers, the ants are given until the end of autumn to produce an offering of twice the usual amount. Later, while he is being admonished by Atta and the royal council of the colony, Flik proposes a plan to recruit warrior bugs to fight off the grasshoppers, much to the Queen's amusement. When Atta and the council agrees to his proposal, Flik actually believes they have accepted the merits of his plan, whereas the council actually saw it as a convenient way of simply keeping Flik from wreaking any more havoc with their food-gathering activities.

Flik finds his way to the City garbage under a trailer, where he finds a group of recently fired circus performers, whose act had collapsed into chaos, and mistakes them for the warrior bugs he's seeking. The bug troupe, meanwhile, mistakes Flik for a talent agent who wants to book their act, and agrees to travel with him back to Ant Island.

Both Flik and the circus troupe soon become aware of their respective mistakes. However, the rest of the ant colony and the queen had become convinced that these newcomers are indeed the warriors for which they had hoped when the Circus Bugs help Flik pull off a daring rescue of Dot, Atta's younger sister of the colony, who idolizes Flik and a wounded Francis, a ladybug performer of the Circus Bug troupe from a predatory bird. Flik was also able to gain Princess Atta's respect and apology to him in the process.

Caught between the opportunity to turn around his fortunes within the colony, and the knowledge that the bug troupe are not who they appear to be, Flik advocates building a fake bird to scare away Hopper, the leader of the grasshoppers, who is deeply afraid of birds. The ants unite behind Flik's plan until the circus ringmaster, P.T. Flea, arrives to retrieve his performers, thereby blowing Flik's cover. As punishment for deceiving the colony, Atta foolishly banishes Flik, who sadly joins the rest of the circus.

Meanwhile, at the grasshopper's home under a sombrero in a desert, Molt, Hopper's brother is tricked by other grasshoppers into trying to talk Hopper out of returning to Ant Island since they have more than enough food to last and it will rain soon. Hopper in response shows his henchmen exactly why they are returning by burying the three who questioned him with hundreds of seeds. Saying that the ants and seeds are alike, ants may be puny by themselves but they outnumber grasshoppers 100 to 1. They aren't returning because of food, they're returning to keep the ants from figuring out how powerful they really are.

Having wasted an enormous amount of time pursuing Flik's plan to stand up to the grasshoppers, the ants try desperately to gather enough food for a new offering, but due to the rapidly-approaching winter season, they can't find enough food to meet the quota. When the grasshoppers return and are angered by the meager offering, Dot overhears Hopper's plan to squish the queen after receiving the full offering, and convinces her friends to put Flik's bird plan back into action. With her wings finally grown in, she goes after Flik and convinces him and the Circus Bugs to return to save the colony from Hopper's tyranny.

With the Circus Bugs' deception and the bird springing to action, the plan nearly works, but when a confused P.T. inadvertently incinerates the bird, Hopper realizes he has been tricked and takes out his anger on the ants, but more onto his primary instigator, Flik. After absorbing a beating from Hopper's rabid, feral grasshopper Thumper and to Hopper's declaration of ants living under salvery to grasshoppers, Flik declares, in response to Hopper's claims of species superiority:

"You're wrong, Hopper. Ants are not meant to serve grasshoppers. I've seen these ants do great things, and year after year they somehow manage to pick enough food for themselves and you. So who's the weaker species? Ants don't need grasshoppers! It's you who need us! We're a lot stronger than you say we are...and you know it, don't you?"

Indeed, Hopper's angered and worried expression leads Flik to realize that Hopper has always known how strong the ants are. However, Hopper's reaction to Flik's challenge in front of the whole ant colony, along with Princess Atta make them collectively realize that they vastly outnumber the grasshoppers, and that they needn't endure their oppression any longer. As Hopper tries to squish Flik, Atta defends him and revolts against Hopper.

The ants and the Circus Bugs rise up in a wave of fury and chase the grasshoppers, (excluding Molt) out for good, with Dot and Dim finally standing up to Thumper, but not before Hopper abducts Flik in a plan to exact revenge upon him. Flik's friends set off in pursuit of them, with Princess Atta in full admiration of Flik, rescuing him and thanks to some quick thinking by Flik, they lure Hopper to becoming devoured by a real bird and her chicks. Flik is welcomed back to the colony, and all the Circus Bugs join him in a celebration before departing from Ant Island.

A Bug's Life was a much more complex film than Toy Story because of the more complex character models, so Pixar's computers tended to run sluggishly for the animation process. The crowds of ants were particularly challenging, with some 400 crowd shots scattered throughout the film, with many requiring the animation of 800 characters. The technical team worked around this by instructing the animators to work with 4 or 5 groups of 8 to 10 ants. The software team wrote an "ant generator" program that would duplicate the character models and motions of the ants, and then automatically and randomly adjust the character models of each ant to change physical traits such as eye and skin color, height, and weight. The ants were then randomly scattered throughout the shot. This allowed these shots to be animated much more efficiently and for ants to look different from one another, despite the fact that the programmed motions would be nearly identical. These tools were based on existing "particle systems" that allowed autonomous dust and snow, which would eventually be perfected to allow up to 2 million dust particles on Wheezy's shelf in Toy Story 2 and 3 million hairs on Sulley in Monsters, Inc.

DreamWorks Animation's similar film Antz was released a little more than a month before A Bug's Life. DreamWorks' Jeffrey Katzenberg left Disney in 1994 and said the idea for Antz came from a 1991 story pitch by Tim Johnson that was related to Katzenberg in October 1994. However, Disney had been working on developing an ant film since 1988. Pixar head John Lasseter pitched A Bug's Life the day Katzenberg left Disney in August 1994, and said he felt "betrayed" when he learned Antz was scheduled for release before A Bug's Life. According to Lasseter and Steve Jobs, Katzenberg offered to stop development of Antz if Disney moved the release date of A Bug's Life, which was coming out opposite DreamWorks Animation's The Prince of Egypt. Pixar refused.

The release date of Antz was moved up from March 1999 to October 1998 in response to Disney's refusal. Even though A Bug's Life was the first to be pitched, Antz was finished and released first. A Bug's Life, however, was more profitable.

Reviews were positive. The film got a 92% Fresh rating on Rotten Tomatoes, the lowest of any Pixar film, until Cars got a 74% in 2006.

According to Box Office Mojo, A Bug's Life made $162.8 million in its U.S. theatrical run, easily covering its estimated production costs of $120 million. This made it the fourth highest grossing movie in 1998. Even so, it had been the lowest grossing Pixar feature animated film, until The Good Dinosaur. Its worldwide box office total was $363.4 million. 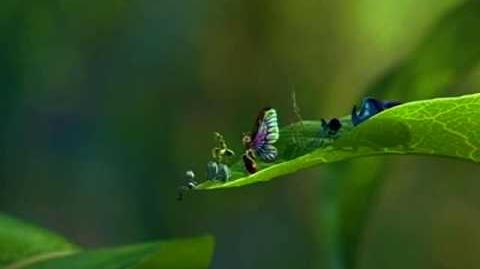 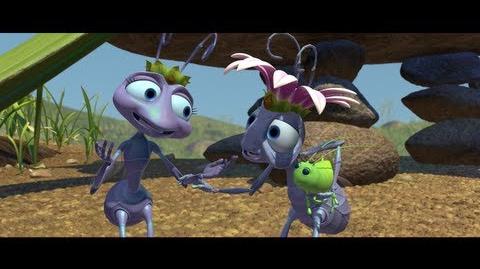 This is the first Pixar feature film to feature a short that plays before the film (not counting the 2000 VHS reprint of the previous feature film); Theatrical and video releases of this film include Geri's Game, an Academy Award-winning Pixar short made in 1997, a year before this film was released.

An A Bug's Life Video Game was released for N64, GBC, PlayStation, Dreamcast, and PC. 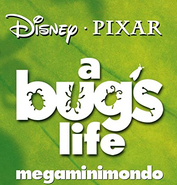