A Bug's Life: The Video Game is a video-game based on the Pixar movie, A Bug's Life. The game was released in November 1998, on PlayStation, PC, Nintendo 64 and Game Boy Color.

It's not only terrifying for the Ants; it's downright humiliating! Flik, a klutzy but inventive worker, has built a Harvesting Contraption to increase Food Production. Instead, it runs out of conrol and destroys the the Ants' Food Offering to the Grasshoppers.

The player plays as Flik, the protagonist of the movie. He had several moves which were running, jumping, attacking with berries, picking up things (such as seeds), growing plants, throwing plants, using a grain harvester, butt-bouncing, swinging and sliding.

Each Token gave you Plants with lots of Leaves, the more you obtained, the higher you could go.

If you did a certain task in a particular level, you would be transported to a hidden Bonus level that had a Bonus Movie Clip, three stages had these, they were as follows: 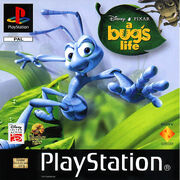 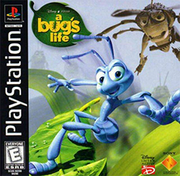 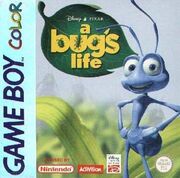 Add a photo to this gallery
Retrieved from "https://pixar.fandom.com/wiki/A_Bug%27s_Life:_The_Video_Game?oldid=180770"
Community content is available under CC-BY-SA unless otherwise noted.