Acer is a Lemon and one of Professor Z's top henchmen in Cars 2.

Acer is an evil-minded car, as he is working for Professor Z in hopes of destroying the World Grand Prix and have his make model be the strongest in the world.

He can also be considered a little dumb, as he often sees light-hearted things that Grem doesn't.

Acer has always felt like an outcast in the car world. The beat-up green AMC Pacer joined forces with his fellow “lemon” cars as henchmen for the devious Professor Z, whose clandestine mission is to wreak havoc at the highly visible World Grand Prix. Acer must hunt down the American and British secret agents who have stolen crucial information about Professor Z’s underhanded plot. His primary target just happens to be Tow Mater, who has been mistaken for a spy. Acer tries very hard to be a tough guy, but he is over eager compared to his no nonsense partner Grem.

In the movie, Acer did everything his partner Grem was doing although he only watched the crashes in the races whereas Grem was actually working the camera beam. In Japan, Acer, along with Grem, attacked Rod Redline in the bathroom who passed along information about the conspiracy plot to Mater. Acer and Grem brought Rod to an abandoned warehouse where Rod was pumped with Allinol and Professor Z demonstrated the camera on him. Acer interrogated the agent and when he didn't fess up, watched as Grem killed him. Acer, along with Grem, arrived at Big Bentley in London where Mater, Holley Shiftwell and Finn McMissile were trapped and about to be crushed by the clocks gears. When Mater discovered the bomb on his radiator and when McQueen chased him down to see what the situation was, Grem and Acer try to capture the two friends only to be foiled by Holley who swoops down from the sky, sending the two lemons flying into Ye Left Turn Inn and as a result, Acer along with Grem get beat up by cars bigger and stronger than them. Acer along with Grem and the other lemons were then presumably arrested soon after.

Acer: "He's getting away!"
Tony Trihull: "Not for long!"
—Acer and Tony Trihull, when chasing Finn McMissile

Acer: "Finn McMissile?! But you're dead!"
Finn McMissile: "Then this shouldn't hurt at all."
Acer: (covered in lather) "Aaah!"
—Acer finds out that Finn McMissile is still alive.

Acer with Professor Z and Grem

Acer and Grem about to show Zundapp the crushed remains of Agent Leland Turbo.

Acer ramming into Redline who was distracted by fighting Grem.

Acer questioning Rod "Torque" Redline while he is being tortured

Acer being told that Mater is in the pits. 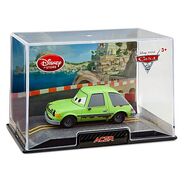