Outside Luigi's Casa Della Tires, Guido is spinning around with his forks spread out because Mater is teaching him how to fly. A skeptical Lightning McQueen asks Mater what he knows about flying, and Mater replies, "Everything." Mater then proceeds to tell the story.

Mater tows a car to Propwash Junction, a town inhabited by friendly planes who greet him. As he drops off the car at a repair station, Mater watches a group of jets, the Falcon Hawks, in amazement. He is asked by one of the Falcon Hawks if he's going to the air show tomorrow, and he accepts. Then, he sees Skipper's Flight School and reads the sign, "We can teach anyone how to fly guaranteed!"

Mater, interested in learning how to fly, enters and meets Skipper, the flight instructor. Skipper points out that Mater just a tow truck. Mater then says to him that he can teach anyone guaranteed, just as the sign says. Skipper reluctantly gets his mechanic Sparky to install a pair of wings, a rudder, and a rear propeller on Mater. After quickly learning the essentials of flying in the air, Mater has a bit of trouble getting up at first, but he succeeds. Soon, his inability to control his flying gets his hook caught on some telephone wires, causing Mater to get flung back and fly backwards, giving Skipper the impression that he really can teach anyone.

Meanwhile, the Falcon Hawks prepare for tomorrow's air show, but Black Hawk, one of the members, sprains one of his wings, and now they need a fourth flyer to take his place. They see the airborne Mater flying backwards and are impressed. Mater manages to land back on the strip, but he tumbles and ends up going upside-down. Nevertheless, the Falcon Hawks invite him to perform with them in the air show, and Mater agrees to join them.

The next day, the Falcon Hawk leader, Red Hawk, Green Hawk, and Mater (as Mater Hawk) put on an amazing show together, with Mater providing the majority of the entertainment. For the grand finale, the Falcon Hawks hold out a long piece of rope and Mater uses his hook to grab the rope and fly backwards with greater speed, breaking the sound barrier. Suddenly, Mater's wings break off and Mater starts falling down.

Lightning, listening to the story, asks Mater, "What did you do?" Mater replies, "Oh, you remember, Lightning McQueen Hawk!"

Back in the story, Lightning McQueen Hawk flies in and grabs Mater by the hook, saving him. He helps Mater with the finale by throwing him up into the air with the Falcon Hawks. He catches Mater and safely takes him back to the ground, where Mater presses a button and sets off a spectacular fireworks display.

Lightning insists that the whole thing never happened, and Mater says, "It did, too." At that moment, Mater gets a call from the Falcon Hawk leader and is told that he is needed to take place for one of the Falcon Hawks. He throws his hook up and is caught by the rope being held by the Falcon Hawks.

After the short ends, (Cars 2 DVD and Blu-ray only) Mater meets up with Sparky in front of the Propwash Junction sign and says "Hey, they ought to make a whole movie about planes." Sparky says it's a good idea and the two look at the audience in anticipation, breaking the fourth wall.

A member from the Falcon Hawks. 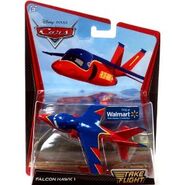 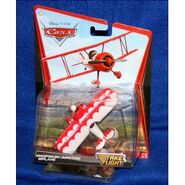 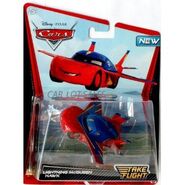 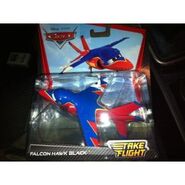