Al Oft is a minor character in Cars, Mater the Greater, Cars 2, and Cars 3. He is an airship that floats in the sky above all Piston Cup races. Advertising Lightyear tires, Al always gets a buzz from being able to watch the race from great heights.

"Al is high on life. As an endorsement billboard in the sky for the Lightyear Tire company (proud sponsor of the Piston Cup), he loves to provide those grand images high above the track. He's just happy that his job sends him to great sporting events, because he always has the best seat in the house!"[2]

Al Oft also returns in Cars 3, according to Brian Fee.[3]

Al Oft in Mater the Greater 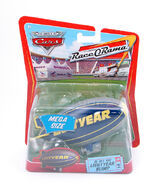