Cars
Cars 3
Albert Hinkey is a character in Cars and Cars 3.

"Albert Hinkey is McQueen's biggest fan -- known as the "Buffet Master" among friends, Al can guzzle two gas stations worth of fuel in one sitting! To match his size, Al is the biggest and best friend one can ever have."[1]

In the film, Albert is sitting in the middle of the Motor Speedway of the South, among other caravans. He shouts encouraging words to McQueen after he makes it through the big wreck caused by Chick Hicks, and honks his horn loudly, much to the annoyance of the other caravans and a tiny blue car next to him.

Later, he appears next to Larry and R.M. attending the race at the Los Angeles International Speedway as they cheer on Lightning McQueen. He gets amazed when he and the rest of the crowd notice Doc Hudson. He also shows sadness when he witnesses McQueen forfeit his victory so he can help Strip Weathers finish his last race, much to the delight of R.M.

Albert is present during the film's opening race at the Motor Speedway of the South, still sporting his colorful McQueen fan gear. He is seen clearing a way for himself through the crowd as he moves towards the fence.

"Yeah, McQueen! Ka-chow!" (honks his horn, while the crowd members around him are disgusted by its loud noise)
—Albert cheering on McQueen after he makes it through the big wreck. 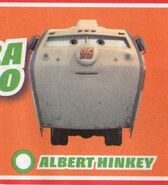 Die-cast
Add a photo to this gallery
﻿

Retrieved from "https://pixar.fandom.com/wiki/Albert_Hinkey?oldid=210756"
Community content is available under CC-BY-SA unless otherwise noted.