Cars 2
Alex Vandel is a character in Cars 2.[1] He is a blue Opel Zafira, who attempts unsuccessfully to pass a security gate at a Tokyo airport, under the inquisitive eye of a security officer. 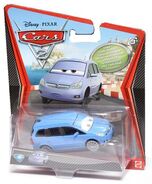 #45 Alex Vandel
Add a photo to this gallery

Retrieved from "https://pixar.fandom.com/wiki/Alex_Vandel?oldid=229706"
Community content is available under CC-BY-SA unless otherwise noted.