Cars 2
Alexander Hugo is a character in Cars 2.

"Alexander Hugo is not who you think he is. He is also known as Chop Shop Alex and Alexander the Not-So-Great, among other names. He's got a rap sheet a mile long and connections to the Hugo organized crime family. He's currently wanted in France, Germany, the Czech Republic, and Serbia, so check his rap sheet before you go anywhere with him."[1]

Alexander is a black car who works as one of the personal guards of Victor Hugo. He is part of the Hugo family that works with Professor Z. He is the only black Hugo that talks in the film. He appears to be close friends with Ivan.

Mater: "Wow! This place looks like it's made outta gold!"
Holley Shiftwell: "That's because it is, Mater. Now, be careful what you say."
Mater: "Why is that? What do you mean, 'Don't talk to ya'? So you want me to stop talkin' to ya right now?"
Alexander Hugo: "You are acting strange today, Ivan."
Mater: "I have no idea what you're talking about, 'Alexander Hugo, aka Chop Shop Alex.' Hey, you got a lot of aka's, Alex. But I guess that makes sense, seein's how you's wanted in France, Germany, the Czech Republic..."
Holley Shiftwell: "Mater, stop it!"
Alexander Hugo: "Okay, okay, keep your voice down! You gonna make me arrested!" (whispers to another Hugo): "Don't mess with Ivan today. He's in a bad mood."
—Mater, disguised as Ivan, talking to Alexander Hugo. 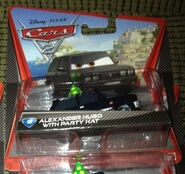 Retrieved from "https://pixar.fandom.com/wiki/Alexander_Hugo?oldid=123942"
Community content is available under CC-BY-SA unless otherwise noted.