"These three little dudes are from a strange alien world: Pizza Planet!"
—Andy Davis shows the aliens to Bonnie Anderson

The Squeeze Toy Aliens (a.k.a. Little Green Men or LGMs for short) are rubber squeak toys in the Toy Story franchise. They represent small, short, lime-skinned space aliens with three eyes, three-fingered hands chubby bodies with short arms and legs, large feet, and oblong heads with pointy ears and a single club-tipped antenna on top. All have the same appearance, speak in the same voice, and wear the blue space uniforms containing the Pizza Planet logo on the right side of the chest and a purple collar around the neck. They also wear a dark blue belt around their waists and a set of dark blue boots on their feet.

In Toy Story, the aliens are found in a claw vending machine at Pizza Planet that Buzz Lightyear climbs into. They believe the crane is a kind of deity who sometimes selects one of their kind to go to a better place.

One alien in particular was picked up by Sid, which then put Buzz Lightyear in view. Sid then went after him. Woody tried to escape the machine with Buzz, but the aliens pushed them back out, not wanting to upset the claw. Sid then went home with Woody, Buzz, and the alien. Once inside, Scud immediately greeted him, and Sid gave him the alien to chew on, as Woody and Buzz watched in horror.

Later, when all Sid's toys were surrounding Sid, the alien now looking damaged revealed himself from under Scud's feeding bowl to show it was also alive to join the rest of Sid's abused toys to teach him a lesson.

In Toy Story 2, when Andy's toys were on a mission to rescue Woody, they encounter three toy aliens inside a Pizza Planet delivery truck that they hijack to chase Al to the airport. Originally from the crane game inside Pizza Planet, they now serve as a car decoration. During the chase, the Aliens fly out of the window but are pulled back in by Mr. Potato Head, and the aliens become quite attached to him. Their unison catchphrase is "You have saved our lives. We are eternally grateful." After the toys return home, Mrs. Potato Head chooses to adopt the three aliens as her children, much to her husband's dismay. They are last seen listening to Wheezy singing "You've Got a Friend in Me".

During one of the outtakes, whilst the camera focus is being checked, the three aliens discuss if any of them made it into the first Toy Story. One claims if you look at the letterbox copy, his arm is grabbing Woody's ankle. The same one then states that he's been offered to play a villain in a toothpaste commercial, which greatly impresses the other two.

In Toy Story 3, these same three Aliens are first seen in Andy's realistic play scenario, serving as evil accomplices of One-Eyed Bart (Mr. Potato Head's character) and Betty (Mrs. Potato Head's character), providing transportation for their escape by a pink corvette. The corvette is sliced in half by Buzz Lightyear's laser, and One-Eyed Bart protects himself, his wife and the Aliens by summoning his "Attack Dog With a Built-In Force Field" (Slinky's role). The villains are warped to Evil Dr. Porkchop's spaceship.

Several years after the events of the previous film, the Aliens still say their message of gratefulness to Mr. Potato Head, much to his annoyance. A little later, they join the rest of Andy's toys at Sunnyside Daycare. There, the aliens meet a construction vehicle toy with a claw on it, making the aliens recite their catchphrase "The Claw" and follow the vehicle. When the toys experience a rough playtime with the toddlers in the Caterpillar Room, the aliens are being sat on and bounced on by one toddler, and they end up becoming tangled up in Slinky's coils.

Much later, as the toys make their way toward the garbage chute (the only escape route from Sunnyside that Woody has learned from Chatter Telephone), Woody, Bullseye, and the aliens riding on Bullseye are forced to make a detour due to an approaching security truck. As they make a detour, they encounter Big Baby sitting on a swing, watching the night sky. As they sneak past Big Baby, one alien falls off Bullseye, landing with a squeaking sound, which attracts Big Baby's attention. However, at the last moment, Woody, Bullseye and the aliens dive underneath a plastic bucket by the time Big Baby reaches the place where they had been hiding before. While escaping on top of the dumpster, one of the aliens gets his feet stuck, and as Woody goes back to free the alien, Lotso (who has been thrown into the dumpster by Big Baby) reaches out and pulls him into the dumpster just as a garbage truck arrives to pour the contents of the dumpster into the truck. The rest of the toys go to help Woody, only to end up inside the truck. When they are dumped at Tri-County Landfill, the aliens spot the claw and run toward it (despite Woody and Mrs. Potato Head yelling at them to come back), but are plowed away by a bulldozer and presumed dead. However, they eventually manage to make their way into the control room, where they operate the claw that rescues the toys, who are about to be incinerated at the last moment. As the aliens approach the Potato Heads, Mrs. Potato Head tells them, "You saved our lives."

Mr. Potato Head immediately follows by telling them, "And we are eternally grateful," and he gives them a big hug as he finally accepts them as his children. At the end of the film, they are given to Bonnie Anderson, along with the rest of the toys; when Andy shows Bonnie the aliens, he mentions Pizza Planet as the strange alien world where they have come from.

In the end credits, they are seen being juggled by Totoro, to the amusement of their adoptive parents. Later, one of the aliens plays Juliet with Mr. Pricklepants playing Romeo in their rendition of Shakespeare's Romeo and Juliet. Finally, the aliens are among an audience of toys who enjoy watching Buzz and Jessie perform a paso doble to "Hay Un Amigo En Mi," the spanish version of "You've Got a Friend in Me".

They return in Toy Story 4, although their role is very minor compared to the other films.

The Aliens return in Toy Story That Time Forgot, but have no speaking lines.

In the Toy Story films, the Aliens appear to be promotional toys for Pizza Planet, as they wear space uniforms with the restaurant's logo as their emblem. They are only found as prizes in the rocket ship crane game, which makes them known for their near-worship of "The Claw". They are also known for being in tune with cosmic forces. All speak in the same voice, are the same gender (male), and are implied to be unintelligent and sometimes childish.

In Buzz Lightyear of Star Command, they are an actual alien race, many of whom work for Star Command as scientists. All LGMs have a telepathic link to one another, which is powered by an object on their homeworld, which is known as the Uni-Mind. Without it, the LGMs have trouble thinking clearly. 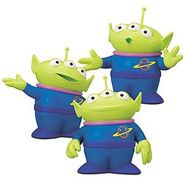 One Alien: "A stranger."
Another Alien: "From the outside."
All Aliens: "Ooohh!"

"I have been chosen! Farewell, my friends. I go on to a better place."
—One Alien, as the claw, controlled by Sid, picks him up.

"Nirvana is coming. The mystic portal awaits."
—The same alien, as Sid carries him home

Buzz: "Why won't it go?"
Aliens: "Use the wand of power."
—Aliens tell the toys how to make the Pizza Planet truck move

"You have saved our lives. We are eternally grateful!"
—Aliens in 2 and 3
One Alien: "The mystic portal."
All Aliens: ""Ooohh!"
—Aliens, as the toys approach a maze of conveyor belts at the airport

Aliens: "You have saved our lives. We are eternally grateful."
Mrs. Potato Head: "You saved their lives? Oh, my hero! And they're so adorable! Let's adopt them!"
Aliens: "Daddy!"
Mr. Potato Head: "Oh, no."

Mrs. Potato Head: "You saved our lives."
Mr. Potato Head: "And we are eternally grateful. My boys!"
Aliens: "Daddy!"
—The Potato Heads express their gratefulness to the Aliens for saving them from the incinerator 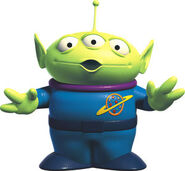 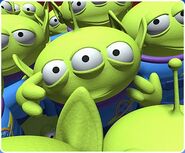 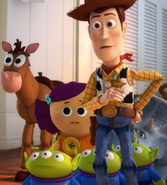 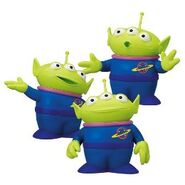 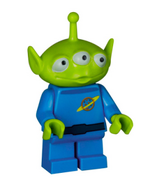 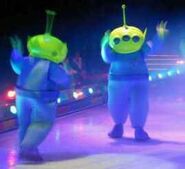 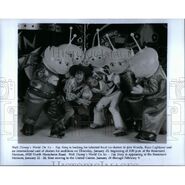 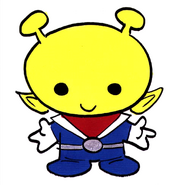