Anger is a character in Inside Out. He is the red Emotion and one of the five Emotions inside the mind of a young girl named Riley, along with Joy, Fear, Disgust and Sadness.

Lewis Black describes Anger as follows: "He's angry. He knows the group is well-meaning and they try hard, but they don't get how things should work as well as he does. So he has to stay on top of everything, and the only way he knows how to get their attention, keep it, and make sure they get things done right is by getting angry. He is comfortable with his anger. It makes him happy. But when pushed too far, the top of his head bursts into flames." [1]

"Anger feels very passionately about making sure things are fair for Riley. He has a fiery spirit and tends to explode (literally) when things don’t go as planned. He is quick to overreact and has little patience for life’s imperfections." [2]

Anger is an avid reader of The Mind Reader, a newspaper which seems to have the ability to update itself instantly as relevant events happen in Riley's life. Unsurprisingly, Anger also has a tendency to advocate for the use of the only curse word Riley knows, and is the Emotion that reacts the most violently to the TripleDent Gum commercial.

During Riley's childhood, Anger stays fairly in check as Joy was Riley's dominant emotion. However, when Riley turns 11 and her family moves to San Francisco, the Emotions are confused by the new situation. All of a sudden, Anger, Fear, and Disgust are much more present and generate much more memories.

When Joy and Sadness, along with all the core memories, are accidentally expelled from Headquarters, Anger, Fear and Disgust are left alone to control Riley. Anger gets out of control much more frequently, despite Fear's efforts to calm him down. His tantrums precipitate the fall of Friendship and Hockey Island.

After one day of this madness, Anger decides he's had enough of it. He reasons that since all Riley's happy core memories were made in Minnesota, they should go back there to make some new ones; though he calls it the "happy core memory redevelopment program", he is effectively asking that Riley runs away. Disgust and Fear are unsure about it, but end up agreeing. Anger plants the corresponding idea bulb in the console, and Riley accepts the idea. Declaring there is now no turning back, Anger pushes Riley to steal her mother's credit card, precipitating the fall of Honesty Island. As Riley runs away, Family Island, the last island standing, crumbles down, and Anger abruptly realizes how bad his idea was. The three emotions try to change Riley's mind, but the idea bulb remains stuck in the console, which begins to shut down. Fortunately, Joy and Sadness come back to Headquarters and know how to solve the problem. As Joy and Sadness were stuck outside of the windows of Headquarters, Disgust proceeded to trigger Anger by insulting him, causing his head to explode with fire as he does when angry. The fire was used to melt the glass so Joy and Sadness could get into Headquarters.

Sometime later, as Riley turns 12, Anger is excited to find out that the newly installed upgraded console grants him access to a complete library of curse words.

Anger is intelligent, very serious, short, somewhat antagonistic, very reluctant to express sadness or happiness, bitter and hoarse, but has a somewhat underlying caring nature. He has a fiery spirit and tends to explode (literally) when things do not go as planned. As explained by Joy, he really cares that things are fair and differs from Fear, as Joy differs from Sadness. Despite his intention to fix things, he sometimes acts impulsively and does things his own way, like Joy did, resulting in more harm.

Anger is the shortest of the Emotions. He has crimson skin, a bald head, and tan oval eyes. He wears a white shirt and a gray tie with red triangles separated in the middle by a zigzagging line of yellow, as well as a brown belt, red trousers and gray shoes. When angry, volcanic bursts of flame burst from his scalp. 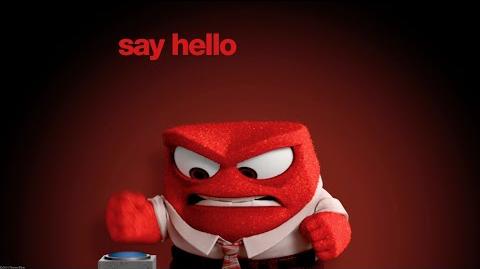 Meet Anger - Inside Out 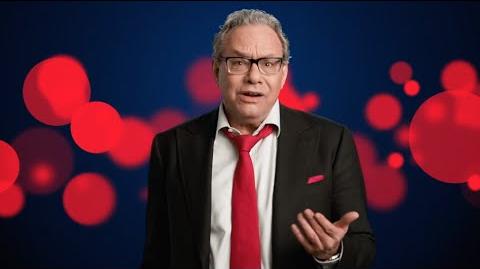 Meet Lewis Black as Anger in INSIDE OUT 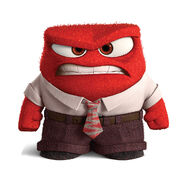 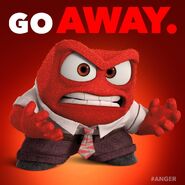 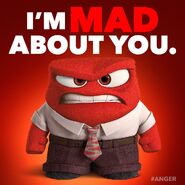 An ad for Inside Out featuring Anger seen on a BART train during the film's first week of release.

The first design of Anger 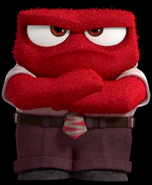