"The squealing mascot of Monsters University’s rival school, Fear Tech, becomes the unsuspecting target of an MU prank when he’s secretly swiped. But Archie the Scare Pig is no boneless ham; he can take care of himself, and his fast feet and feisty nature keep his hijackers in hot pursuit."[2]

Sulley stole Archie in order to impress Roar Omega Roar, the fraternity he was hoping to enter. Pursed by Fear Tech students, he broke in Mike Wazowski's room with the pig, who hid under Mike's bed. Sulley, realizing he wasn't in his room as he thought, tries to get Archie out from under the bed. Sulley chases the pig, and accidentally causes a bookcase to fall on him, at which point he introduces himself to Mike. Soon after, Archie steals Mike's hat and jumps out the window. Archie races through Monsters University's campus up to the Greek row, chased by Mike and Sulley, and wreaking havoc. Mike rides the pig for some time, and later manages, by throwing a football at a row of bikes, to imprison the pig in a garbage can. Nevertheless, Sulley got all the credit for the capture. The catch of Fear Tech's mascot meets with joy among the MU students, who proceed in covering the Fear Tech logo with the MU insignia. It is uncertain what became of Archie after that, though presumably he became MU's new mascot. 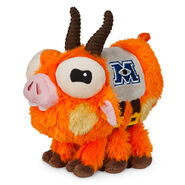