"The jewel of the BnL fleet - the Axiom."
—Axiom Ad Campaign

The Axiom is one of the locations seen in WALL•E.

The Axiom is one of the countless Starliner spacecrafts built by the Buy n Large Corporation (BNL) to evacuate humanity to space while the Earth (that was overwhelmed by trash due to mass consumerism) was cleaned by the BNLs machines, trash compactor robots called WALL-Es and huge mobile incinerators. It was described as “the jewel of the BNL fleet” and was most likely its flagship.

Designed as a massive luxury cruise ship, the Axiom kept everyone aboard fed and entertained as it cruised through space. The ship was crewed almost entirely by robots, though there was a human captain. The majority of the ship's functions were handled by its computer, as well as an autopilot called AUTO. The ship has all the trappings of a typical cruise liner, such as shops, restaurants and swimming pools, as well as robotic stewards to keep order and an escape pod bay in case of an emergency.

WALL•E hitched a ride on one of the EVE probe transport ships that was returning to the Axiom.

At the time when he arrives at the Axiom, it as well as the other Starliners have been in space for hundreds of years because the cleaning operation had failed. The BNL CEO Shelby Forthright had ordered all Autopilots to follow Directive A-113 which was to stay in space and not return to Earth, regardless of any proof of life sustainability.

When the ship has docked in the Axiom, WALL•E sees how the bots begin to unload the five EVE units that the ship has transported. Because he loves the EVE probe one he wants to follow her, and he places himself on the third EVE so the Unloader arm bot believes that he is the third probe and places him at the place where the cleaner bots led by a small robot called M-O are cleaning the EVEs.

Then GO-4, the ship's second-in-command, and two SECUR-T steward bots arrive there. GO-4 inspects EVEs, and he realizes that the probe one has found a plant. He summons a cart-like transport robot called MVR-A to take her away. GO-4 hops on the transport bot and a robotic arm loads EVE on it. WALL•E immediately starts to chase the MVR-A.

MVR-A takes EVE and GO-4 (and WALL•E who has grabbed a handle at the back of the transport bot) to the bridge of the Axiom. AUTO inspects EVE and awakes Captain McCrea. AUTO and GO-4 make the captain think that EVE has actually not found anything and that she is just defective. Whilst EVE is being taken care of at the repair ward, WALL•E misunderstood that she is being tortured and intervenes, causing the rejects to be free and identifying him and EVE as "rogue robots". Later, as EVE tries to send WALL-E back to Earth in a life-pod, they see that GO-4 tries to destroy the plant he has stolen from EVE. WALL•E manages to save the plant and EVE takes it to the captain.

After that, the captain orders AUTO to return back to Earth, but he disobeys because he must follow Directive A-113. As McCrea tries to argue whether or not earth is habitable, AUTO and GO-4 stage a mutiny, locking McCrea in his quarters, overpowering EVE and WALL-E and sending them both down the garbage chute. Determined to return to Earth and restore it to its former glory, Captain McCrea fights AUTO for control of the ship, destroying GO-4 in the process when he attempts to intervene. EVE, WALL•E and the plant were almost sucked out into space, but EVE managed to free them both with M-O and the WALL•As helping to stop the airlock doors. When convinced to repair him on Earth, EVE helps WALL•E bring the plant to the Lido-Deck whilst the reject bots pursuit. AUTO temporarily rids himself of the captain by spinning himself; since he serves as the ship's wheel, this causes the Axiom to tip onto her starboard side, dislodging the passengers from their hover chairs. Though WALL•E is nearly destroyed trying to impede AUTO's efforts to prevent the ship from returning to Earth, Captain McCrea relieves AUTO of duty and the plant is placed in the scanner, triggering a hyper-jump which returns the Starliner to Earth and allows EVE to repair WALL•E back to life and it's passengers to begin restoring their home world. In the end credits sequence, it was shown still docked next to a lake with vegetation growing over parts of its hull. 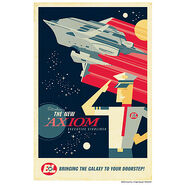 The Axiom beside the Zephyrus and Epiglottus-Classes of BnL starliners

Early concept art of the Axiom

Early concept art of the axiom

The starboard of the Axiom

Axiom back where it belongs 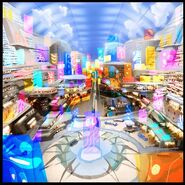 The Axiom lands on Earth.