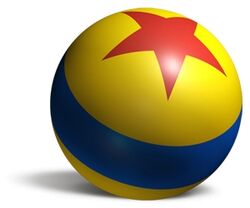 A yellow ball with a blue stripe and red star known as the Luxo Ball (a.k.a. Pixar Ball) first appeared in the Luxo, Jr. short as a prop for Luxo, Jr. Since its debut, it has made numerous cameos in other Pixar films, most prominently in the Toy Story films. 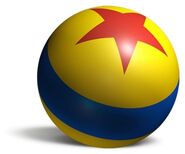 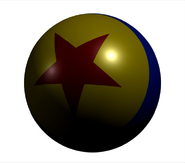 The alternate opening of The Incredibles

A tile on Sunnyside Daycare has the yellow surface, blue stripe, and red star of the ball. 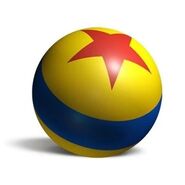 The ball in a web short for Inside Out 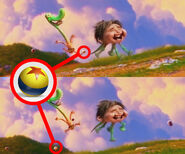 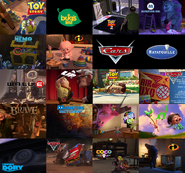 Compilation of all movies with the Luxo Ball

Kinect Rush: A Disney/Pixar Adventure
Add a photo to this gallery

Up (Russell's Badges)
Add a photo to this gallery

The Membership pages of World of Cars Online

Merit Badge Mayhem
Add a photo to this gallery
Retrieved from "https://pixar.fandom.com/wiki/Ball?oldid=207287"
Community content is available under CC-BY-SA unless otherwise noted.