Jodi Benson
Barbie is a popular Mattel toy who serves as a supporting character in the Toy Story series. She also appears in Hawaiian Vacation.

A bunch of Barbies were first seen in Toy Story 2 partying in an aisle at Al's Toy Barn. Rex, Hamm, Mr. Potato Head and Slinky drive by this aisle, looking for Woody, when the Barbies catch their attention. After Hamm asks for directions to Al (the owner of the store), Tour Guide Barbie jumps into the car and navigates them around Al's Toy Barn. She drives the toys through the Hot Wheels aisle, eventually reaching the Buzz Lightyear aisle, where they pick up a newer Buzz instead of Andy's (who is left behind, having been trapped in the cardboard box by the new Buzz).

After Andy's toys track down Al's suitcase at the airport to save Woody, they have a fight with the Prospector, who wants to take the Roundup Gang to Japan. Once they stop him by using the flash from Cameras from someone else's luggage in there, they put him in a Barbie backpack that belongs to a girl named Amy. She is surprised by the new "big ugly man doll" as she retrieves her backpack. She then places her Barbie doll in a backpack next to Stinky Pete, to whom she plans to give a makeover. The Barbie next to Stinky Pete tells him he'll like Amy because she's an artist, as she shows Amy's modifications to the other side of her face, much to Stinky Pete's discomfort.

The morning after Andy's toys return home from their Journey to save Woody, three of Molly's Barbies are seen providing background vocals for a fixed Wheezy as he sings "You've Got a Friend in Me" in celebration.

"And so you two are absolutely identical? You know, I'm sure I can get you a part in Toy Story 3. I'm sorry. Are we back? Oh! All right, girls. Lovely talking with you. Yes, anytime you'd like some tips on acting, I'd be glad to chat with you. All right, off you go then."
—Stinky Pete talking to two Barbies in his box

During the outtakes, two identical Barbies are seen having a conversation with the Prospector inside his box when he is supposed to be filming a scene. He tells them he will get them a part in Toy Story 3 before the Barbies leave the box. Although this does not happen, a different Barbie does appear in Toy Story 3. After the outtakes, Tour Guide Barbie makes her final appearance, saying "bye-bye" to the audiences, then complaining how her face hurts from smiling so long.

One of Molly's Barbie dolls has lasted up until this point, but Molly tosses her into a box bound for Sunnyside Daycare. Soon, Andy's toys sneak into the box, joining Barbie to go to Sunnyside as well, now that Andy is going to college. Mrs. Potato Head tries to comfort Barbie, who is crying about being abandoned by Molly. When Woody describes daycare as a sad, lonely place for toys who have no owners, she begins to bawl and sob hysterically.

At Sunnyside, Barbie first shakes one of Stretch's tentacles. Shortly thereafter, Barbie and the toys meet Lotso, head toy at Sunnyside, who then calls for Ken to join the tour. As Barbie and Ken catch sight of each other, they walk toward one another, and Barbie asks if she and Ken have ever met. Little does Barbie know that Ken is a member of Lotso's gang. As Lotso assigns Andy's toys to the Caterpillar Room, Ken asks Barbie if she wants to live in his Dream House in the Butterfly Room, and when the toys approve, Barbie willingly goes with Ken as she leaves the Caterpillar Room.

That evening, Buzz Lightyear, who has left the Caterpillar Room to go see Lotso, witness Barbie and Ken spending some more time together as they share their love dialogue, until Chunk and Twitch, two of Lotso's evil accomplices, walk by and take Ken with them to head for the Vending Machine located down the hallway to gamble. When Ken doesn't seem to come back, Barbie goes out of the Butterfly Room to investigate. Finding Ken in the Caterpillar Room, she asks him what is happening, only for Ken to tell her to wait in his Dream House, but upon discovering that Ken and the other Sunnyside toys has locked up her friends, Barbie becomes angry with Ken and subsequently breaks up with him as she snatches away the scarf she has previously given to him. She is then imprisoned with the rest of the toys.

The next day, after Woody arrives back at Sunnyside to rescue his imprisoned friends, Barbie takes part in Woody's plan to escape the daycare. After Ken and Buzz take roll call, she calls Ken over and begs him to let her stay with him at his Dream House. Hearing Barbie's sobs, Ken becomes stuck in a dilemma, but gives in to Barbie's plea, making her promise to follow his orders. At the Dream House, Barbie is awestruck at Ken's vast collection of clothes, but when Ken, thinking Barbie is still angry at him for what he has done to her friends, bitterly says how no one appreciates his clothes, Barbie sweet-talks him into showing off his many outfits to her, making Ken's spirit reinvigorate. Barbie becomes amused and applauds as Ken shows off his various outfits to her. As Ken shows off his martial arts in his Kung Fu Fighting outfit, Barbie tackles Ken from above and demands him to tell her what Lotso has done to Buzz and how to get Buzz back to normal. Realizing that it is a ploy by Barbie, Ken initially protests, but decides to see her try.

Barbie then ties up Ken (who is now in nothing but his underwear) to a paddle and interrogates him by ripping several of his outfits. Ken tries to remain defiant as much as he can, but when Barbie brings out his Nehru jacket that she claims is from 1967, he begs her not to rip it. Despite Ken's pleas, she starts ripping the jacket until Ken, unable to bear it anymore, mentions about the instruction manual as he falls over in the paddle. As Ken confesses to Barbie that Lotso has switched Buzz to "Demo" mode, Barbie puts down the Nehru and demands Ken to tell her where to find the manual, then disguises herself using Ken's space suit and asks Bookworm to hand her the Buzz Lightyear instruction manual (Bookworm becomes disgusted when he sees "Ken" wearing high heels).

With the manual in hand, Barbie catches up with Woody and Slinky, then they return to the Caterpillar Room to catch up with Hamm and Rex, who have trapped Buzz in a storage bin, but Buzz kicks the bin off and tries to escape. After Hamm and Rex recapture Buzz and hold him down, Barbie unscrews Buzz's back compartment so Woody and Rex can have access to the "Play-Demo" switch and the reset hole, respectively. However, the toys end up resetting Buzz into a Spanish version of his deluded, Space Ranger self, leaving Barbie and the others in bewilderment. With time running short, they escape Sunnyside through the garbage chute, but Lotso and his gang corner them. Barbie, supporting Jessie's claims about Sunnyside not being a place for family but a prison and Lotso being a liar and a bully, stands up and tells Lotso with her surprising understanding of civics: "Authority should derive from the consent of the governed, not from the threat of force!" Lotso then signals Stretch to push the toys, including Barbie, into the dumpster.

Just then, Ken appears, having come for Barbie, and tries to stop Lotso, making Barbie surprised at his sudden appearance. Lotso mocks Ken for loving Barbie, stating that there are hundred million Barbie dolls everywhere, only for Ken to remark to Barbie not like the one he met, making her affectionate again. Angered, Lotso grabs Ken and throws him across the dumpster to force him to join Barbie. Woody catches Ken and pulls him up to the chute with help from the other toys. Barbie runs over and hugs Ken, making him astonished to have won her back. When the toys end up being loaded into a garbage truck, Barbie attempts to help, but is stopped by Ken from risking her life. Barbie is shocked to see her friends being loaded into the garbage and screams sadly as Ken holds her.

Barbie later makes amends and reconciles with Ken, and the two reestablish their relationship, becoming boyfriend and girlfriend once again. Together, they revolutionize Sunnyside, turning the daycare into a true toy paradise for all toys, and become its new leaders. Under the couple's leadership, the daycare toys now rotate their time between the Butterfly Room and the Caterpillar Room, hold beach parties at the sandbox, and have discos in the Butterfly Room.

The next day, the toys, now residing at Bonnie's house as her new toys, receive a message from the daycare informing them that Sunnyside has become sunny once again. They read the message and assume that Barbie has written it (as remarked by Buzz about the fancy handwriting), only to find Ken's signature at the end, much to their dread.

Barbie is first seen along with Ken as they unzip Bonnie's backpack and emerge into Bonnie's room. There, they meet Woody, Buzz, and other toys, but Ken becomes depressed when he finds out that he and Barbie have ended up in Bonnie's room and missed their "flight" to Hawaii. After Ken sinks back into Bonnie's backpack in great depression, Barbie reveals to Woody and the others the vacation plans she and Ken have formulated for each other.

Later, Barbie calls for Ken to come out, and when Ken opens the backpack, he is greeted by Jessie's enthusiastic "ALOHA!" then finds himself standing in "paradise" with Barbie. Woody and his friends recreate "Hawaii" for the couple, such as deep-sea diving, guided nature walk, and an entertaining dinner. After their various adventures in "Hawaii," Ken and Barbie share their first kiss in the snow at sunrise, as Woody and his friends watch through a window, but then the two fall into the snow, prompting the toys to come to their rescue by digging them out and releasing them from a block of ice.

Barbie and Ken unzip themselves out of Bonnie's backpack

Barbie and Ken react to seeing a shark on TV screen

Barbie and Ken on their guided nature walk

Barbie and Ken during their entertainment-filled dinner

Barbie makes a silent appearance during the flashback in Toy Story 4. Woody, Buzz, Jessie, and Slinky come to Molly's room to enlist Bo Peep in helping them rescue R.C. who has been lost outside in a thunderstorm. Bo calls on her and two other barbies to help with "Operation Pull Toy." Molly's toys create a catapult and Jessie gets on, then on Bo's command, Barbie and her friends jump on the catapult and launch Jessie into the air so she can unlock the bedroom window. It can be assumed she was saddened by Bo's departure after being given away to a new family. Two years after the third film, she presumably still runs Sunnyside with Ken.

Barbie deeply touched after hearing that Ken may want to share what he has with her.

Barbie with Ken in his dressing room

Barbie with Ken tied up

Barbie decides to rip up Ken's groovy clothes to get information out of him and as a punishment for his betrayal.

Barbie and Ken at Disney On Ice

Barbie on the right of the group of toys 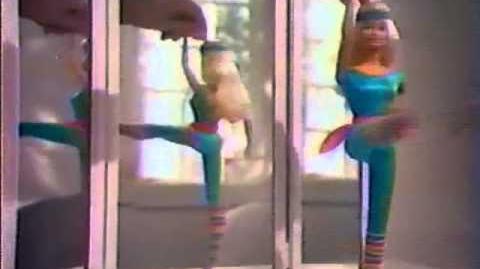 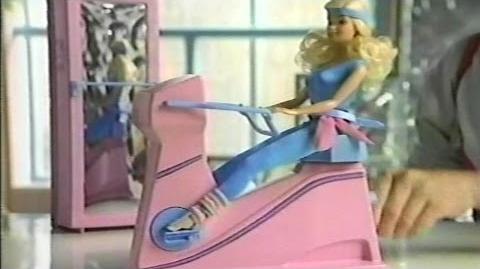