Toy Story
Toy Story 2
Toy Story 3
Hawaiian Vacation
Toy Story 4
The Barrel of Monkeys are a real-life toy by Milton Bradley seen in the Toy Story series. It consists of a colored barrel (Andy's is yellow) containing twelve red monkeys. The goal of the game is to pick up the most monkeys by creating a chain with their hooked arms.

Slinky: "It's too short! We need more monkeys!"
Rex: "There aren't any more! That's the whole barrel! Buzz, the monkeys aren't working! We're formulating another plan! Stay calm! But where could he be?"
―Slinky and Rex, as the toys use up an entire Barrel of Monkeys in their attempt to save Buzz[src]

In the first film, they are first seen being used by Andy's toys as they try to save Buzz Lightyear after falling out of the window of Andy's room in Toy Story.

The monkeys appear again at the end of the film in Andy's room engaging in the Christmas festivities with the rest of Andy's toys, hearing what presents Andy receives for Christmas from the Green Army Men.

In the second film, they appear in a scene where Andy has Hamm, portraying as "Evil Dr. Porkchop," give Woody the choice of "Shark" or "Death by Monkeys" for a captive Bo Peep. They are later seen at the very end of film joining the rest of the toys to watch Wheezy sing "You've Got a Friend in Me."

They later appear in one of the outtakes, harassing Mr. Potato Head, when Mrs. Potato Head suggests that he take monkey chow with him in his parts storage on the journey to save Woody.

In the third film, they are seen in an opening scene during Andy's play scenario that takes place in the wild west. Hamm, as Evil Dr. Porkchop controlling his ship, activates the button labeled "Death by Monkeys," which unleashes a barrel that explodes when it hits the ground, sending thousands of monkeys scattering in all directions. The monkeys grab Woody, Jessie, and Buzz, holding them hostage, as Mr. Potato Head, whom Andy portrays as the villainous One-Eyed Bart, prepares to finish them off.

Later, when Woody gathers all the toys remaining, none of the monkeys are seen. Since Barrel of Monkeys is actually a game, the monkeys may have been put in the attic.

The Barrel of Monkeys were seen in the Toy Story Toons episode, Hawaiian Vacation. In the short, Bonnie was seen to have three red barrels. Each barrel was being played by an Alien as a drum, while the monkeys danced as they put on a Hawaiian show for Ken and Barbie. 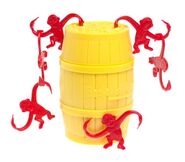 The real life toy of the Barrel of Monkeys (yellow version)

Another variant of the Barrel of Monkeys (blue version)

The button to release a "Death by Monkeys" 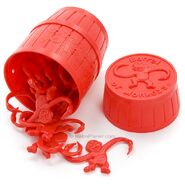 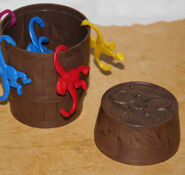 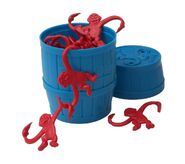 Retrieved from "https://pixar.fandom.com/wiki/Barrel_of_Monkeys?oldid=197690"
Community content is available under CC-BY-SA unless otherwise noted.