Emily Davis
Billy, Goat and Gruff are three porcelain sheep joined together and sometimes mistakenly believed to be a single sheep with three heads who appear in Toy Story and Toy Story 2 as minor characters. They enjoy causing mischief, such as pulling the video game remote from Rex in Toy Story 2. When they cause mischief, they can only be stopped by their shepherdess, Bo Peep. At the end of Toy Story, the sheep are seen above Woody and Bo Peep, with a branch of mistletoe. Billy, Goat and Gruff do not appear in Toy Story 3, having been sold with Bo.

Billy, Goat and Gruff reappear in Toy Story 4 along with their shepherdess, Bo Peep. It is revealed that despite their names, all three of them are female.

In the first film when Andy has set a stage portraying Mr. Potato Head as One-Eyed Bart, he threatens to have the sheep run over if Bo Peep doesn't keep quiet as he 'robs' the bank. Later when Woody gathers the toys for a staff meeting, Bo Peep pulls Woody over and thanks him for saving her sheep then asks if he'd like her to get someone else to watch them that night, (meaning she wants the two of them to go on a date.) Later in the film, Bo is stroking their heads when Hamm tells the toys that he sees Woody next door. In the end, the sheep are seen above Woody and Bo Peep with a branch of mistletoe.

The sheep are first seen returning with Bo from searching Molly's room for Woody's hat. Bo goes to calm Woody down and is about to kiss him but is interrupted by her sheep who are playing tug-of-war on a video game controller with Rex, prompting her to whistle to attract their attention.

Like Bo Peep and the other toys in Andy's room, the sheep were given away. Unlike their shepherdess, however, they didn't appear in any home footage at the beginning of the film. Their disappearance along with Bo, as well as their time spent away from Woody and the gang was revealed in the short, "Lamp Life".

Along with Bo Peep they left the antiques store they were sold to to live a life of adventure. They now have several stickers on them due to having suffered a couple of cracks and scratches. The sheep help Bo collect random objects to use for repairs in case they or any of the lost toys they are helping get damaged. When Woody is reunited with Bo at the carnival, the sheep are thrilled to see him. They tackle Woody to the ground and begin licking his face in joy, until he reveals he cannot remember their names and thinks they are boys. They are not impressed at first but all is forgiven almost instantly. As Bo is whispering things to Giggle McDimples, the sheep bring Woody a straw and a red band-aid, and he strokes their heads as he tells Giggle about when Bo belonged to Molly. The sheep take part in the drama with The Bensons in retrieving Forky from Gabby Gabby, during which time they end up with another injury. When Woody is about to head home, he tells the sheep to take care of Bo, but eventually Woody decides to stay with them.

Bo Peep and her sheep 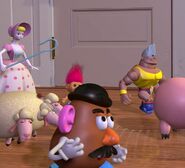 Billy, Goat and Gruff upset with Woody because he was wrong about their names.

The 3 sheep and Giggle laughing after Woody was scared to break Bo's arm by accident.

Bo Peep and her sheep falling.

Bo Peep hugging her sheep after the fall.