Cars
Billy Oilchanger races for the team "Octane Gain" in the movie Cars.

"It's Billy Oilchanger's dream to become a racing color commentator after he retires. He's watched all the greats, like Darrell Cartrip and Bob Cutlass over the years, and even practices announcing by calling the races out loud to himself while he's in them. It's great experience, though the other drivers find it distracting and a little creepy."[1] 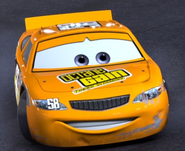 Oilchanger smiling on the MSS 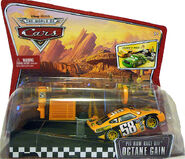 Retrieved from "https://pixar.fandom.com/wiki/Billy_Oilchanger?oldid=230997"
Community content is available under CC-BY-SA unless otherwise noted.