Hopper: Well, what's this? Another one of your little bird tricks?
Flick: Yup.
Hopper: Are there a bunch of little girls in this one, too?!
—Flik tricking Hopper.

The Bird is one of the supporting characters in A Bug's Life.

"A bug's greatest fear, the bird who nests at the edge of the creek bed, chases Dot, Francis, and the entire circus troupe. The near miss inspires Flik's greatest idea, and becomes his most powerful weapon against Hopper."[1]

In the film, birds are predators to all bugs. It is every bug's worst nightmare to be eaten by a bird, so terrifying that even Hopper is afraid of them and lost his right eye after a blue jay nearly ate him.

The bird within the film is first seen at the opening, flying across the screen within a puddle reflection, just before a leaf drops onto the puddle.

Later, when Flik tries to stop the circus bugs from leaving, he sees one of her feathers, her nest, and her three unhatched eggs inside it nearby and flees. The bird suddenly appears out of nowhere, sees them and chases the bugs out of her territory for food. Meanwhile, Dot watches on a dandelion seed that breaks off, leaving her in the air as the bird suddenly flies up after her, prompting her to let go of the seed. Francis catches her and they hide in the cracked riverbed, but he is knocked out by a falling rock. Flik convinces the circus bugs to rescue them, while Heimlich and Slim distract the bird. After rescuing Dot and Francis, they fly into a thorny bush with Dim where the Bird is unable to get to them. She then accidentally pricks her feet on the branch's thorns and flies away, giving up.

The encounter with the bird inspires Flik to put together a plan of constructing a model bird to scare the grasshoppers away when they return to Ant Island. However, when their bird is finally used, P.T. Flea also mistakes it for a real bird and sets it on fire with his Flaming Death act, thereby exposing it to Hopper as a fake. After being rescued by Princess Atta when Hopper tries to fly away with him, Flik lures Hopper back to the nest where the mother bird encounters Hopper, who mistakes her for another fake and taunts her until she shrieks at him. She then picks him up and feeds him to her three newborn chicks, thus ending Hopper's reign of terror and insult on the ant colony.

She appears to be a small finch with orange and yellow feathers, but from the insects' perspectives, she is tremendously huge.

The Bird is portrayed as neither heroic or evil. Like most birds, she is a predator and hunts for food (in this case, bugs) when she's hungry. She feeds Hopper to her newborn chicks when they hatch near the end of the movie. 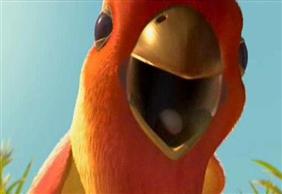