When he loses his cool, he blows up into a big, spiky ball. This doesn't happen often, except when he argues with Gurgle over what kind of drill the dentist is using. Bloat also has many hidden skills: He's an expert on extreme fish, knowing that three sharks combine have 4,800 teeth. Bloat's expanding body can be useful in an emergency and he also uses it to topple the volcano for one of Gill's wacky plans.

Bloat loves hosting the mystical Ring-of-Fire ceremony at Mount Wannahockaloogie. He enjoys scaring the new initiate with his loud cries of "Ooh-ha-hah!" He likes being in a gang and puffs up with pride when Gill calls him "Brother Bloat."

"Bloat looks like any regular fish―until he gets mad, that is. When this short-tempered blowfish blows his cool, he puffs up into a spiky ball of rage. When Bloat was little, his big brother used to use his as a football, which just made him madder!"[2]

Bloat is a porcupine pufferfish who lives in Philip Sherman's office tank. When he gets scared or agitated, he bloats up, and then one of the other fish has to deflate him.

In the ending of the film, Bloat and the rest of the Tank Gang escape the aquarium exactly as Gill had planned, but Bloat then asks, "Now what?" ending the gang's joy of escape and causing them to worry about how they will get out of their plastic bags.

However, during the credits, the tank fish have escaped their bags somehow. As the credits continue to roll, Bloat is seen having a brief dispute with Gurgle. He then bloats up, and Gill and Gurgle start spiking Bloat around like a volleyball. Then Jacques rolls him along like him rolling a blueberry. 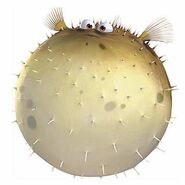 Bloat was originally voiced by Richard Kind before Brad Garrett voices him. 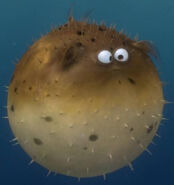 Bloat inflates like a balloon or a beach ball