Bo Peep is a supporting character in Toy Story and Toy Story 2. She will also return in Toy Story 4.[1] She is a porcelain figurine based on the nursery rhyme character Little Bo-Peep. She is also Woody's girlfriend. In private, she is a great deal more daring with her words and actions, which Woody seems to be quite fond of. The sassy shepherdess shows a great deal of concern for Woody, as well as all the other toys.

"The sooner we move, the better."
—Bo Peep, after Sid blows up a Combat Carl

In Toy Story, she is first shown when Andy Davis, who has set up a stage, is portraying her as a distressed shepherdess who is despaired when Mr. Potato Head, portrayed by Andy as One-Eyed Bart, threatens to have her sheep run over if she doesn't keep quiet after he "robs" the bank. Bo Peep is portrayed to be calling for help, which comes when Andy pulls out Woody to arrest "Bart," thus saving the day. When Woody gathers up the toys for a staff meeting, Bo Peep hooks her cane on Woody's neck to pull him closer, thanks him for saving her flock, and asks if she can have somebody else, like Woody, to "watch the sheep tonight," to which Woody laughs sheepishly.

After Buzz Lightyear arrives in Andy's room, she is shown to be impressed about Buzz like the other toys, especially after he demonstrates how he "flies," but she still maintains a special place for Woody when she tells him that Andy, who is excited about having Buzz, will always have a special place for him. She tries to stop Buzz from trying to stop Sid Phillips (Andy's next door neighbor) from blowing up a Combat Carl. But after Sid does, she decides that things will be much better when the toys have moved sooner. Later that evening, after Buzz Lightyear is accidentally knocked out the window, Bo Peep is horrified when Mr. Potato Head blames Woody for the accident, and she tries to stop the toys from ambushing Woody, but they are forced to retreat when they hear Andy coming back to the room.

That night, Bo Peep becomes shocked when she hears from Andy that Woody has gone missing, and tells Slinky Dog how she hopes Woody is okay. The next day, she is surprised to see Woody in Sid's room. But when Woody inadvertently exposes Buzz's severed arm, she screams in horror, beginning to doubt him. Worriedly facing the possibility that Mr. Potato Head was right about Woody being a murderer after all, she walks away from the window, trying not to think about it. On the night before the moving day, when seeing Andy sleeping sadly in his bed with his cowboy hat, she is shown to be worried about Woody as much as Andy does, suggesting that she still somewhat believes that Woody didn't harm Buzz.

On the moving day, after the toys, under the orders of Mr. Potato Head, throw Woody out of the moving truck for trying to get rid of RC, Bo Peep was unable to do anything to stop them, but then Lenny the binoculars catches sight of Woody riding RC with Buzz. Using Lenny, Bo Peep sees Woody, Buzz and RC catching up to the truck, and helps the toys realize that Woody didn't harm Buzz after all, making the other toys realize their error. On Christmastime at Andy's new house, Bo Peep hooks her cane on Woody's neck to pull him closer (just like what she has done at the beginning of the film), wishes him a "Merry Christmas", and kisses him under a mistletoe held by her sheep above (although off-screen, it can be told she has done so by her smooching sounds and Woody having lipstick marks from Bo Peep on his cheek).

"Why would someone steal Woody?"
—Bo Peep, after Woody is stolen

In Toy Story 2, Bo Peep is first shown returning from Molly's room to Andy's while looking for Woody's hat. Hearing Woody blaming his "stupid hat" as the cause of him missing cowboy camp for the first year, she calms him down by assuring him that the boy who has written his name on the sole of Woody's boot will take him to camp regardless of if Woody has his hat or not. She then hooks Woody closer with her cane, supposedly for another kiss, but is interrupted by her mischievous sheep who is playing tug-of-war on a video game controller with Rex, prompting her to whistle to attract its attention. She tells Woody to hide when the toys hear Andy's dog Buster approaching. When Andy enters the room, during the five minutes he has until the family leave for camp, he sets up a stage where he portrays Bo Peep as a damsel in distress. In his "scene," Woody orders Hamm, portrayed as Evil Dr. Porkchop, to release her, but "Dr. Porkchop" refuses and forces Woody to choose how Bo Peep should die by either "Shark or Death by Monkeys." Woody, instead, chooses Buzz Lightyear, which leads to "Dr. Porkchop" being knocked over by RC (on which Buzz is riding) and Woody saving Bo Peep; however, Andy accidentally rips Woody's arm during the "play." After Woody ends up on a shelf when Andy decides to leave him home, Bo Peep tries to call to Woody, but Woody instead backs away in depression, leaving her deeply saddened.

A little later in the film, Bo Peep is shown feeling devastated after Woody is stolen from a yard sale. When Buzz deciphers the secret message inside the license plate of Woody's kidnapper, he has Etch A Sketch draw the man in the chicken suit, and Bo Peep, along with the other toys, reacts in horror upon realizing that the kidnapper turns out to be Al McWhiggin, the same man who has appeared on a TV commercial for Al's Toy Barn earlier in the film. She joins the other toys on the table as they look for the aforementioned commercial. When Buzz plans to rescue Woody, Bo Peep gives Buzz a kiss on his cheek (intended for Woody when Buzz finds him). She waves good-bye to Buzz and his rescue party as they leave Andy's room on their mission. During their absence, Bo assumes the responsibility of maintaining order in Andy's room while waiting for Woody and the others to arrive back home (although she is not seen again until the end of the film). At the end of the film, when the toys finally return, she is more than happy that Woody is safely home. It is shown that she likes what Andy has done to his arm as Woody shows it to her, and the couple join Buzz and Jessie as Wheezy sings his own version of "You've Got a Friend in Me."

In the TV series, Bo Peep also made a silent cameo at the intros of Buzz Lightyear of Star Command.

Bo Peep makes a brief silent cameo in Toy Story 3 in the home videos Ms. Davis makes of Andy. Later on, Woody comments that some of the toys were either given away, sold in yard sales, thrown out, possibly broken, or donated. When Rex mentions her name, Woody reacts sadly, showing that he is still heartbroken over her loss.

She does make a full appearance in the Toy Story 3: The Video Game along with Wheezy. Annie Potts also reprises her role as Bo Peep for the video game.

At the 2015 D23 Expo, John Lasseter confirmed that Bo Peep will be returning in Toy Story 4, and be part of the main plot point, in that the movie will revolve around her and Woody getting back together. How she will reunite with Woody and the gang is currently unknown, as she supposedly went away somewhere (as mentioned above) between the events of Toy Story 2 and Toy Story 3.

Bo And Her Sheep 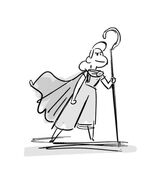 Woody: "You'd think they'd never seen a new toy before."
Bo Peep: "Well, sure. Look at him. He's got more gadgets on him than a Swiss Army knife."
―Woody and Bo Peep on the newly-arrived Buzz Lightyear[src]

"I found my movin' buddy!"
—Bo Peep, after Buzz "flies" around Andy's room

Bo Peep: "Don't let it get to you, Woody."
Woody: "Uh... let what? I don't, uh... What do you mean? Who?"
Bo Peep: "I know Andy's excited about Buzz. But you know he'll always have a special place for you."
―Bo Peep assures Woody that Andy will still love Woody[src]

"What are you doing? Get down from there!"
—Bo Peep orders Buzz to get down from the windowsill
"Would you boys stop it?!"
—Bo during the mass accusation of Woody
"Woody's gone? ... Oh, Slink, I hope he's okay."
—Bo Peep, after hearing about Woody's disappearance
"Oh, Woody. If only you could see how much Andy misses you."
—Bo Peep, as she watches a sad Andy sleeping
"It is Buzz! Woody was telling the truth!"
—Bo Peep, using Lenny to see Woody and Buzz riding on RC
"Rocky, the ramp!"
—Bo Peep tells to lower the ramp for Woody, Buzz and RC

(Bo Peep pulls Woody up to her with her cane again)
Woody: "Oh, Bo, there's gotta be a less painful way to get my attention."
Bo Peep: "Merry Christmas, Sheriff."
Woody: "Say, isn't that mistletoe?"
Bo Peep: "Mm-hmm."
―Bo Peep wishes Merry Christmas to Woody and kisses him (under the mistletoe held by her sheep)[src]

"It's not in Molly's room. We've looked everywhere."
—Bo Peep, while searching for Woody's hat

Woody: "Oh, great. That's just great. This will be the first year I'll miss Cowboy Camp all because of my stupid hat!"
Bo Peep: "Woody, look under your boot."
Woody: "Don't be silly. My hat is not under my boot."
Bo Peep: "Will you just look?"
Woody: "See? No hat! Just the word 'Andy'."
Bo Peep: "Uh-huh, and the boy who wrote that will take you to camp with or without your hat."
(pause)
Woody: "I'm sorry, Bo. It's just that I've been looking forward to this all year. It's my one time with just me and Andy."
(Bo Peep suddenly hooks Woody closer with her cane)
Bo Peep: "You're cute when you care."
Woody: "Bo, not in front of Buzz."
Bo Peep: "Let him look."
―Woody and Bo Peep, when Woody can't find his hat.[src]

(Bo Peep walks over to Buzz)
Bo Peep: "This is for Woody when you find him."
(She smooches him on his cheek)
Buzz: "All right, but I don't think it will mean the same coming from me."
―Bo Peep kisses Buzz before Buzz departs on his mission[src]

Woody: "Oh, Andy did a great job, huh? Nice and strong!"
Bo Peep: "I like it. Makes you look tough."
―Woody shows his fixed arm (done by Andy) to Bo Peep[src]

Retrieved from "https://pixar.fandom.com/wiki/Bo_Peep?oldid=193421"
Community content is available under CC-BY-SA unless otherwise noted.