"There's a snake in my boot!"
—Bonnie, saying Woody's catchphrase

Bonnie Anderson is a secondary character in Toy Story 3, Toy Story 4, Toy Story Toons, Toy Story of Terror! and Toy Story That Time Forgot, and is the current owner of Andy's toys.

Bonnie is a young brunette girl who wears a pink tutu. She goes to Sunnyside Daycare, where she is the daughter of the receptionist. Even though Bonnie has an active imagination when playing with her toys (similar to Andy), she is shy and withdrawn when she is around grown-ups.

Bonnie is first seen sitting on the front desk at Sunnyside, holding the Monkey in her hand, wanting to see what Ms. Davis (her mother's friend and Andy's slightly older mother) is donating. Later, she finds Woody hanging by his string from a tree, and she takes him home to meet her very own toys: Mr. Pricklepants, Trixie, Buttercup, Dolly, Peas-in-a-Pod, Totoro and Chuckles the Clown. When Woody goes back to rescue his group, he puts away in Bonnie's backpack.

She is not Seen until at the end of the movie when Andy stops at her house to donate his old toys to Bonnie. Upon seeing Woody, she turns to grab him, but Andy pulls Woody away, which confuses Bonnie. After seeing how Bonnie loves Woody as much as he does, Andy relents and gives Woody to her, and they play with their toys before Andy finally leaves for college. She is last seen when she is taken into her house by her mother for lunch, leaving the toys to watch Andy's car disappear down the road.

In the end credits, it is revealed that Bonnie has made drawings for her toys, including the ones handed over from Andy. She also has drawn Chuckles' smile right, the sight of which makes Chuckles smile for the first time ever since.

Bonnie, having grown slightly and still playing with Andy's toys, although she seems to be losing interest in Woody. On her first day in kindergarten, she creates Forky, a toy made from a spork and pipe cleaners, among other things. Forky quickly becomes Bonnie's favorite toy whom she takes with her at nearly all times, even sleeping with the toy. Bonnie's parents finally decide to go on a road trip with Bonnie, and she takes her toys with her.

Although she repeatedly loses Forky during the trip, she always manages to find him again thanks to Woody preventing Forky from throwing himself away. One day, however, Bonnie wakes to find a spoon in her hand rather than Forky and panics as she cannot find him since he had earlier jumped out of the RV. Although her parents look around for Forky, they turn up nothing, and they continue on.

At some point, Bonnie stops by Second Chance Antiques, although she forgets her backpack and later has to get back, impressed to discover that Forky is inside the backpack. Content, Bonnie sleeps on the way home, although her toys force the RV to take a detour back to the traveling carnival.

In the first episode, Bonnie briefly appears in which she says, "I'm going on vacation," as she bursts into her room, quickly grabs her suitcase from the closet, and rushes out of the room, leaving behind her book bag that, unknown to her, contains Ken and Barbie. Ken despaired as Bonnie and her family drove off to Hawaii.

In the second episode, Bonnie and her mother eat at Poultry Palace. Bonnie was upset that she got a Zurg Belt Buckle in her Fun Meal and requested it be exchanged for a Mini-Buzz. However, the cashier explained that they are out of Mini-Buzzes and the one on display is not for sale. Bonnie then went to play in the ball play with Buzz and Rex, imagining she was sliding into hot lava. As her mother told her they were leaving, Bonnie was unaware that Mini-Buzz had switched places with her Buzz.

In the third episode, Bonnie takes Rex to play in the tub with her bath toys, pretending that Rex was a vicious sea monster. But the fun did not last when her mother turned off the water, drained the tub and wrapped her in a towel to take her to dinner at her grandmother's.

While on the road with her mother, in the center of the trip, one of the car's tires blowout, forcing Bonnie and her mother to pull over into the Sleep Well motel. Upon learning that the tow truck will not come until morning, they are forced to stay the night. While they slept, Bonnie's toys leave her suitcase, only to be captured one-by-one by the manager Ron's pet iguana, Mr. Jones.

Next morning, as they were checking out, Bonnie noticed the curtain behind the manager's desk being pulled back, seeing Bonnie's missing toys. Bonnie quickly collects them and she and her mother leave the motel.

Two days after Christmas, Bonnie plays out a variety of roles with her toys, but unhappily for Trixie, does not play with her as an real dinosaur, instead choosing to play with Angel Kitty as a Kittysaurus. Afterwards, she collects Woody, Buzz, Rex, Trixie and Angel Kitty for her playdate with her friend Mason. Upon arriving, she finds Mason playing his new Optimum X game console and he invites her play, prompting Bonnie to toss her backpack with her toys into Mason's room.

Unknown to Bonnie, her toys encounters Mason's new Battlesaurs, who are unaware that they're toys because Mason was fixated on the Optimum X, and thus sought to kill Woody and Buzz. Trixie goes for the Optimum X's power switch to get Mason and Bonnie's attention off of it. With the game turned off, Mason goes for the power switch, only to find Reptillus Maximus instead. Upon spotting the Battlesaur, Bonnie begins playing with him, prompting Mason to join her and they spend the rest of the afternoon playing with their toys. Afterwards, Bonnie collects her toys and returns home as her mother plans on bringing her back next Tuesday.

Bonnie playing with the Monkey in her first appearance

Bonnie's backpack with a patch of Wally B.

Bonnie playing with her toys in her yard 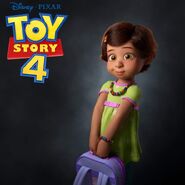 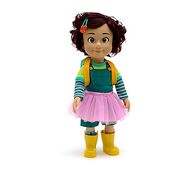 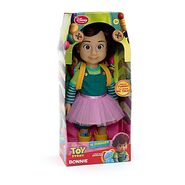