Mike: "Boo? What's 'Boo'?"
Sulley: That's... what I decided to call her. Is there a problem?"
Mike: "Sulley, you're not supposed to name it. Once you name it, you start getting attached to it. Now put that thing back where it came from, or so help me!"
—Mike and Sulley

Boo (real name Mary) is a child who accidentally gets into the monster world in Monsters, Inc.

In the first film, Boo is a 2-year-old human child who has escaped from her room from which Randall intended to kidnap her. Much of the film's plot follows what happens as Sulley and Mike try to get Boo back to safety.

When she first appears, Boo is very attached to Sulley (calling him "Kitty"), but he is not so keen. Sulley and Mike try hard to keep the child out of sight from other monsters. In "Boo on the Loose", they craft and dress Boo in a monster costume so as not to start a panic. They then proceed to lose her in the park. However Sully develops a bond with Boo and decides its better to repatriate her to her bedroom.

Attempting to return Boo home becomes increasingly difficult for Sully and Mike due to their shift, not to mention that Randall is aware she is with Mike. At one point, Sulley, under Mr. Waternoose's orders, then roars like a lion in front of a child used for simulation, not noticing that he has also scared Boo. Sulley tries to apologize to Boo, but she is too terrified of him and runs to cower underneath Waternoose's legs. Waternoose, who has caught sight of Boo, decides to take care of her before anything worse happens. After he and Randall banish Mike and Sulley to the Himalayas, they proceed with extracting screams from Boo by using the Scream Extractor. However, Sulley arrives at the last moment to disable the device to free Boo.

Mike catches up with them, and they rush back to Scare Floor F, with Randall in hot pursuit. Randall chases them to a large chamber where thousands of doors to human world are kept. Mike and Sulley then make Boo laugh to activate the doors, then they go through them, exiting the monster world and entering back into it, in order to lose Randall and reach Boo's door. Just as it looks like Mike and Sulley have lost Randall, Boo suddenly slips off from Sulley's arms, and Randall reveals that he has caught her.

Sulley manages to catch up with Boo, but then Randall ambushes Sulley. Just as Randall is about to finish Sulley off, Boo suddenly jumps on Randall and beats him with a baseball bat, causing him to rapidly change camouflage patterns. Boo has managed to overcome her fear of monsters, especially Randall. After Mike and Sulley banish him through another door, disable that door, and let it fall to the bottom of the chamber to ensure that he will never return, Boo blows a raspberry directed at the shattered door, on the other end of which Randall ends up in the home of a family of rednecks, who mistake him for a gator and beat him unconscious with a shovel.

Mike and Sulley open Boo's door, only to realize that the power has went out, but then, the door moves back to Scare Floor F, where Waternoose and the CDA agents are waiting. Mike runs off with Boo's monster costume as the agents go after him while Waternoose notices Sulley with Boo and her door, and chases them to the simulation room, where he is lured into a trap set by Mike. Mike exposes Waternoose admitting his willingness to kidnap children (possibly including Boo) to Sulley. Mike then reveals to Waternoose that it is a simulation and he was being watched by a crowd including the CDA, who then turn on Waternoose and arrest him.

Immediately thereafter, Roz, revealed to be Agent 001 of the CDA, enters and decides that Boo's door is to be destroyed after she is safely returned to her room in order to ensure that she will never come back again. She lets Sulley have 5 minutes to say goodbye. Sulley takes her in to her room and tucks her in after she shows him her toys, including Jessie the Yodeling Cowgirl from Toy Story 2, a ball from Luxo, Jr., and Nemo from Finding Nemo.

Boo and Sulley take a possibly one last look at each other, then after Sulley closes the door, Boo then opens it to possibly surprise him, only to find her closet instead and Sulley nowhere. After her door is shredded, Sulley feels sad that he'll never see Boo again and keeps one of the splintered pieces from her door as a memento.

At the end of the film, Mike brings Sulley (now the new CEO of Monsters, Inc.) a surprise, which turns out to be Boo's door reassembled. The door becomes functional when Sulley places the piece he has kept, and he opens it to see Boo, who (although off-screen) recognizes him by saying, "Kitty!" This gives Sulley a surprised grin on his face as the film closes.

Boo is a nauseatingly adorable toddler who is curious, and naive. She can speak, but has baby, gibberish vocabulary. The only actual words she says in the film are "Boo!", "Kitty!", "Ew" and "Mike Wazowski!". In other ways, she is advanced for her age, such as already being potty trained. This is seen when she shows to Sulley that she needs to go to the bathroom and doesn't need help.

Boo has brown eyes as well as brown hair in pigtails with pink hair ties. She is shown wearing a pink nightshirt, purple capris leggings, and white socks. She makes friends with Mike Wazowski and Sulley after she sneaks through her door into Monsters, Inc.

Heimlich on Boo's T-shirt in an early test.

Boo compared to the girl at Sunnyside.

Boo and the monster cast 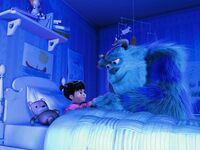 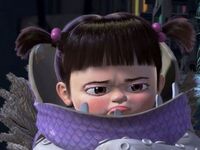 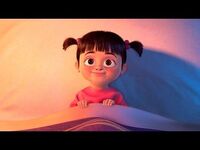 Boo's picture is seen next to the report.

2. Why You Won't See Boo In Monsters At Work