Boost is a supporting character in Cars. He is the leader of the gang called the Tuner Cars. He barks all the orders to DJ, Wingo, and Snot Rod to make sure they are causing as much mayhem on the road as possible.

"Boost wasn't always a gang leader. When he was younger, he worked at a garage for elderly cars where he befriended an early drop-tank racer who turned him onto the ways of racing with nitrous. Learning from the master who racked up records on the Great Salt Lake, Boost promised the old timer he'd keep the tradition alive."[1]

Boost is the leader of the Tuner Cars gang consisting of himself, DJ, Snot Rod and Wingo. Boost and his group are the main cause for McQueen falling out of his trailer. They were driving along the interstate when they noticed a sleepy Mack. Boost decided to have a little fun with him, which the others agreed, by swaying Mack back and fourth until Snot Rod's sneeze makes them flee the scene. Boost later appeared in the epilogue when he and his gang were caught by Sheriff and were impounded. They were later sent to pull Bessie in which some hot tar splashed on them.

Boost in Cars 2: The Video Game. 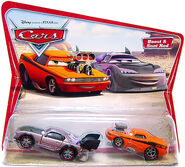 Boost drifting in Radiator Springs with Wingo and DJ 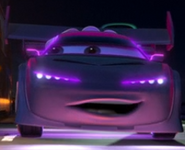