4 minutes, 40 seconds
Boundin' is a 2003 Pixar short film. It was written and directed by Bud Luckey.

In the west lives a lamb whose pride and joy is his wool. When a man comes and shears him, the lamb becomes depressed and uncomfortable without his wool. Later, a Jackalope arrives to the sulking lamb to teach him to bounce back from life's troubles by telling the lamb to conquer his fear without wool. The Jackalope tells the lamb that he can still bounce around the meadow, even without his wool. Getting used to jumping without wool, the lamb gets his wool back again as the time passes by. Some time later, the lamb gets sheared again and this time gets used to bouncing without wool, thanks to the Jackalope who helped him. 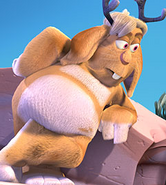