Brian: Park Motors[1] is a minor character in Cars. He is a Park Motors P-150 Courier. Whether it be flags, antenna balls, or other memorabilia, Brian has a gift for selling souvenirs around the racetrack. He had dreams of launching a singing career.

"Brian thought it would be fun to sell antenna balls at the racetrack for a summer -- the problem is, that summer was ten years ago. He had hoped to start seriously pursuing his singing career in September, but one thing led to another and his part-time job became his career. Brian does enjoy the excitement of the racetrack though, and sometimes when he's shouting out, "Get your antenna balls here!" over the roaring crowds, he likes to imagine he's belting out a classic show tune over the cheers of his adoring fans."[2]

Brian can be seen during the first race at the Motor Speedway of the South, shouting "Get your antenna balls here!" 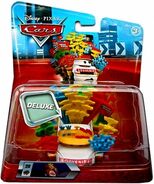