"You can't do this! I've raced for you guys almost ten years!"
—Brick trying to convince his sponsor not to fire him.

Brick Yardley is a character in Cars 3.

Brick Yardley is a veteran racer who races for Vitoline, having replaced James Cleanair almost ten years prior to the events of the movie. Unlike Cleanair, he has the number 24. He also had two wins in the 2015 Piston Cup season.

Right before the race at Los Angeles International Speedway, Lightning McQueen witnesses Brick begging his sponsor not to fire him and let him keep racing, bringing up how long he has been racing and his two wins, but his sponsor claims he has made up his mind and will give his number to a next-generation racer named Chase Racelott. Lightning tries asking Bobby Swift about what is going on with Brick, only to find out that he has also been replaced by a next-generation racer, Daniel Swervez. 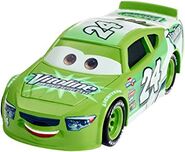 Die-Cast
Add a photo to this gallery
Retrieved from "https://pixar.fandom.com/wiki/Brick_Yardley?oldid=199027"
Community content is available under CC-BY-SA unless otherwise noted.