Cars
Brush Curber races for the team "Fiber Fuel" in the movie Cars.

"Brush Curber is considered to be one of the most consistent veteran Piston Cup contenders. Curber had numerous top ten finishes in the 2006 season, but a string of mid-season malfunctions severely side tracked his run for the Cup. With help from his Fiber Fuel sponsor and an overhauled diet, Brush purged his losing ways. He also attributes his resurgence to his loving wife of forty years, Katherine, and their fourteen children, Hal, Brush Jr., Penelope, Jake, Marty, Willard, Ingrid, Lucille, Scotty, Wendell, Aimee, Kassidy, Florence, and of course Truman."[1]

Curber pulling out of the pit lanes 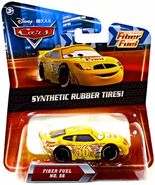 Retrieved from "https://pixar.fandom.com/wiki/Brush_Curber?oldid=230998"
Community content is available under CC-BY-SA unless otherwise noted.