He has an unending supply rising out of the treasure chest at the bottom of the tank, and he wants every one of those bubbles to be his. When Bubbles meets Nemo, he guards his treasure anxiously.

Although a keen chaser of bubbles, he has never managed to work out that it's impossible to catch and keep a single one.

Bubbles' bright yellow coloring makes him easy to spot in murky waters, which is how he ended up captured and stuck in a tank.

"Bonkers Bubbles is a good example of what can happen to a fish if he is left alone too long in captivity. He becomes obsessed with bubbles when Gill says he is proof that fish don't belong in a box—it does things to their minds. Bubbles is nutty about the bubbles that rise up out of the treasure chest, and wants every one of them to be his, even though they all float away and disappear. As a tang fish, Bubbles is distantly related to Dory, which may explain his ditzy ideas."[1]

Bubbles is a hyperactive yellow tang fish. He has a peculiar obsession over the bubbles that come out of a small treasure chest decoration in the fish tank; hence his name. He eventually escapes with the rest of the tank fish into the ocean. During the credits, Bubbles notices some bubbles that appear at one end of the screen and chases after them. 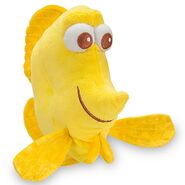