Marcus Scribner
Ryan Teeple (young Buck)
Buck is a character in The Good Dinosaur. He is Arlo's brother.

"Buck is Arlo’s brother: they’re the same age, but Buck is bigger, stronger and a little rambunctious. He likes to tease his fearful brother as often as he can—and Arlo is an easy target. Buck’s size, strength and confidence allow him to do things that Arlo can’t imagine doing—like ripping a tree out of the ground with his teeth."[1]

Buck is the second of the three children of Poppa Henry and Momma Ida to hatch out of his egg right after his sister, Libby. Then, out comes his brother, Arlo, whom he maliciously enjoys inflicting pain on by spanking him with a log the moment he comes out of his egg; much to his father's anger. He spends the first day of his birth playing around the house with his parents and siblings.

When Poppa Henry finishes building the corn silo to protect it from critters who might eat from it and makes his mark with his wife, Buck and his siblings try to do the same but their father reminds them that in order to make their marks, each one has to earn it by doing something big, bigger than themselves; much to Poppa Henry and especially, Arlo's eagerness.

A couple of more years go by, Buck earns his mark by clearing a field then, Libby earns hers by plowing the new open field properly. With every fear and failure, Arlo is the only left with a mark unearned. On the day Arlo tries to really earn his mark without fear, Buck messes and teases him when pretending to have been killed by the chickens Arlo has been charged to feed for years. When Buck discourages Arlo and calls him a coward, his father scolds him and comes to Arlo's defense even when Arlo almost gives up.

Days after his father has been tragically killed for trying to save Arlo from certain death from a flood created by a storm when going after a critter, Buck and everyone else continue his/her own chore even before Arlo gets separated from home for chasing after the critter.

Days later, after Arlo returns fearless and triumphant, Buck and everyone else welcome him back home with hugs and watch him finally make his mark on the silo. 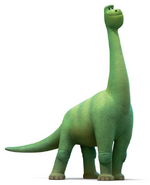 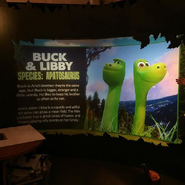