See Also: Sarge, leader of The Bucket o' Soldiers.
"Hey, these guys are professionals. They're the best. Come on! They're not lying down on the job."
—Woody, as the soldiers venture downstairs

The Bucket o' Soldiers, also known as the Green Army Men, are Andy's 200 miniature green plastic soldiers led by Sarge. They are set in particular positions and stuck to bases (however, this does not slow them down), and are stored in a bucket labeled Bucket o' Soldiers. The soldiers are quite disciplined with a "Leave no man behind" policy, and are masters of reconnaissance. Woody describes them as "professionals."

In Toy Story, the Soldiers are sent on a mission to spy on Andy's birthday presents so that the other toys can be prepared for any new arrivals. At the beginning of the film, the soldiers, by Sarge's Recon Plan Charlie, venture out of Andy's room and hide in an indoor plant to report Andy's birthday presents to the toys. They, at least for this mission, use baby monitors as communication devices for Woody and the toys to analyze anything related to toys. At one point, they are knocked away by Ms. Davis after accidentally stepping on them. However, all are unharmed, except for the soldier that had been stepped on. He is then helped by Sarge to an indoor plant that the soldiers are hiding in, where he is fixed up by a medic (the soldier with a green medical cross on his helmet).

After Woody knocks Buzz out the window, the Soldiers, under Sarge's orders, jump up on Woody's body and "frag" him. They are not shown again until the end of the film, when they hide in a Christmas tree to report to the toys what Andy and Molly are getting for their Christmas presents.

In Toy Story 2, the Soldiers’ role is very minor. First, the soldiers are digging and sorting through the toy chest to find Woody's hat. When the toys hear Andy's dog Buster approaching the room, the soldiers, under Sarge's orders, hold back the door (with help from Rocky Gibraltar), but Buster bursts into the room, scattering the soldiers in all directions. At the end, some of the soldiers can be seen along with Sarge watching Wheezy sing "You've Got a Friend in Me." Some buckets are seen at Al's Toy Barn, and Mr. Potato Head, driving a toy car, crashes into them, knocking them down.

In Toy Story 3, the Soldiers are seen during old home videos and a photo with Andy playing with them like he normally did. Now, only three are left, Sarge and the two paratroopers. They try to help the rest of Andy's remaining toys get played with in Operation Playtime by taking a phone into Andy's toy box so Andy will have to face his old toys again. After this fails, the Green Army Men realize that Andy has finally grown up, and since he's cleaning up his room before going to college, one of them says when the trash bags come out, they are the first ones that get to go. Then they fly away from the window. This scares Andy's toys even more, bringing up the possibility of being thrown out and permanently abandoned. After the toys have a final "staff meeting," one of the paratroopers reveals that the other Green Army Men have been thrown away over the years.

A Bucket O Soldiers tub can be seen at Sunnyside Daycare as Lotso and Ken show the other toys around. It is unknown if any of the soldiers from this tub are present at Sunnyside, but if so, it is possible they are reunited.

At the end of the movie, Sarge and the two paratroopers finally land in a playground at Sunnyside Daycare, where they are greeted by Barbie and Ken, now leaders of Sunnyside, who invite them to join the party. It is likely that the three remaining Green Army Men have settled in the daycare under Barbie and Ken's leadership. That night, they stand on the ceiling lights in the Butterfly Room from which they lower a disco ball for Bookworm to illuminate with his flashlight so the Sunnyside toys can enjoy a disco party that is held in the room.

In Buzz Lightyear of Star Command: The Adventure Begins, three of the men, along with Sarge, hold the copy of the movie, and then watch it with the other toys.

Injured soldier: "G-G-Go on without me! J-Just go!"
Sarge: "A good soldier never leaves a man behind."
—Sarge helps an injured soldier to the plant

Sarge: "There he is, men! Frag him!"
Green Army Men: "CHARGE!!"
—Sarge orders his soldiers to "frag" Woody

Sarge: "We've done our duty. Andy's grown up."
Paratrooper #1: "And let's face it. When the trash bags come out, we army guys are the first to go."
Buzz: "Trash bags?"
Woody: "Who said anything about trash bags?"
Sarge: "It has been an honor serving with you. Good luck, folks."
Paratrooper #2: "You're gonna need it." 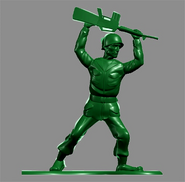 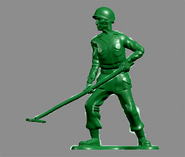 Sarge and his two paratroopers just arriving at Sunnyside Daycare. 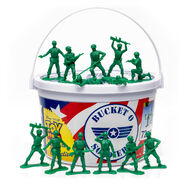