Luckey began his career with Pixar as the 5th animator in 1992[1]. He wrote, directed, and performed all the voices in the short film Boundin'. Luckey also did the voice of Rick Dicker in The Incredibles and Jack-Jack Attack, as well as Chuckles the Clown in Toy Story 3 and Toy Story Toons. Luckey was born in 1934 in Billings, Montana.

Before coming to Pixar, Luckey created many cartoons for Sesame Street[2]. 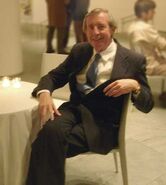