"Jessie loves critters, but none more than her best pal, Bullseye!"
—Andy showing Bullseye and Jessie to Bonnie

Bullseye is Woody's horse and one of the characters introduced in Toy Story 2. Despite being a horse, the way he acts can be similar to that of a puppy. He is extremely affectionate towards Woody, Jessie and the other toys. He doesn't have a speaking voice; instead, he neighs and makes other horse noises.

In Toy Story 2, he is a toy horse that is part of Al's Roundup collection, which he intends to sell at a toy museum in Japan. He is the first of the toys that Woody meets when he arrives at Al's Penthouse. Being in a storage for several years, Bullseye is excited to see Woody finally join the collection. He is shown to loathe fights, as seen when he hides into a can when Jessie is about to pounce on Woody for blaming her for the TV incident that prevented Woody from getting his severed arm back himself. However, Stinky Pete the Prospector stops the fight, and Bullseye expresses disappointment as much as Jessie does when Woody declares he will leave as soon as his arm is fixed. Later, when Woody is about to leave the apartment after having his arm reattached, Bullseye is still shown to be upset, but later brightens up after Woody, having learned about Jessie's tragic past, decides to stay with the gang to go to the museum.

When Andy's toys, led by a new Buzz Lightyear, break into Al's Penthouse, Slinky and Bullseye have a growling match that Jessie tries to stop, but Slinky coils her up along with Bullseye. After Woody decides to go back to Andy's house, he decides to take the Roundup collection with him. And when he asks Bullseye, the horse eagerly licks Woody. However, Stinky Pete locks Woody, Jessie and Bullseye inside the room, and the Roundup toys end up being loaded into Al's case for its shipment to Japan from Tri-County International Airport.

At the airport, Bullseye manages to escape the case just before it reaches the end of a conveyor belt, but Jessie still remains trapped inside the case as it is loaded into the luggage transporter. Woody and Buzz mount the newly freed Bullseye, and they gallop across the airfield to rescue Jessie. Despite being separated from Woody, Buzz orders Bullseye to follow him,

as they are later seen galloping next to the front tires of the plane when Woody and Jessie climb out of the aircraft. Woody and Jessie swing between the tires through Woody's pull-string, and they land on Bullseye, right behind Buzz, just before the plane takes off. Back at Andy's house, Bullseye (along with Jessie and three Pizza Planet Aliens) is now part of Andy's toys, and has every letter of Andy's name printed on the sole of each of his hooves. Finally, Bullseye joins the other toys as they gather round to see Wheezy sing "You've Got a Friend in Me."

"Oh, it's gonna be okay, Bullseye."
—Jessie, after Woody leaves the toys at Sunnyside.

In Toy Story 3, he is first seen in Andy's realistic play scenario when he ferries Woody and Jessie as they chase after a train, which has been robbed by an evil, nefarious bandit couple One-Eyed Bart and Betty (portrayed by the Potato Heads).

Years later, when a teenage Andy opens his toy box to decide what he will do with the toys, he puts Bullseye in the bag destined for the attic. But Andy's slightly-aged mom mistakenly thinks that the bag is trash, and puts it out on the curb. But Bullseye, along with the other toys that have ended up in the bag, manage to escape and board the box bound for Sunnyside Daycare. Bullseye decides to follow Woody back home when Woody decides to leave Sunnyside, but Woody persistently insisted Bullseye to stay with the other toys as he didn't want him to be lonely in the attic, leaving Bullseye heartbroken.

When Woody, having learned of the evil intentions at Sunnyside, returns to the daycare center and reunites with his friends, Bullseye gives Woody his hat back. Bullseye also gives Mr. Potato Head (who has caught up with the toys in a cucumber body after his tortilla body is destroyed by a pigeon) his plastic potato body back when the toys escape Sunnyside.

Finally, Bullseye, along with the other toys, is given to Bonnie Anderson by Andy when he goes away for college. In the end credits, he turns on the boom box to play "Hay Un Amigo En Mi", the Spanish version of "You've Got a Friend in Me" to which Buzz and Jessie perform a paso doble.

Bullseye is super loyal to Woody and would follow him everywhere.

Jessie and Bullseye bonded during their time in storage.

Bullseye was likely good friends with Stinky Pete till his betrayal. 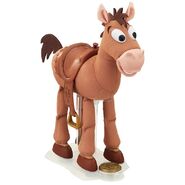