"My name's Buttercup."
—Buttercup introducing himself to Woody

Buttercup is a character in Toy Story 3 and Toy Story Toons. He is a unicorn and one of the toys owned by Bonnie Anderson.

"There is no way out!...Just kidding, door's right over there."
—Buttercup

Buttercup is a white unicorn with a golden horn, mane, tail, hooves, and two pink hearts on his nostrils. Although his feminine appearance would suggest that he is female, Buttercup is actually a male unicorn.

Buttercup first appears in Bonnie's room when he meets Woody. He and Trixie welcome the cowboy nicely while Mr. Pricklepants shushes all of them. After their playtime with Bonnie, Buttercup and the others see Woody trying to leave. Woody explains that he already belongs to someone named Andy. After Woody mentions that Bonnie found him at Sunnyside Daycare, Mr. Pricklepants and Buttercup inform Woody that Lots-o'-Huggin' Bear runs Sunnyside like a prison. After hearing this, Woody returns to Sunnyside to rescue his friends.

During the end credits, he is shown becoming close friends with Hamm, as the two are seen standing side-by-side when Woody reads his friends a message from Sunnyside written by Ken, when they watch an Alien and Mr. Pricklepants perform their rendition of Shakespeare's Romeo and Juliet, and when they enjoy watching Buzz and Jessie perform a paso doble.

"It's gotta be, a bazillion degrees below!"
—Buttercup when Barbie and Ken go outside to have their first kiss.

In the first episode, Buttercup can be notably seen playing poker with a few of the other toys, which he asks Mr. Potato Head if he wins, but he and Mrs. Potato Head say they are gonna have a fun week together, but Mr. Potato Head takes off one of his eyes and arms to play poker with them. Buttercup is also seen when Barbie and Ken go horseback riding. Ken jumps on Buttercup and tells him to go, but Buttercup replies by saying, "Okay, get off me." At the end, when Barbie and Ken went outside for their first kiss, Buttercup says the temperature in the snow has got to be a bazillion degrees below.

So far, this is the only Toy Story Toons episode to have Buttercup speaking.

Buttercup appears with the rest of the toys throughout the short, although in this short, he, along with some of the other toys, doesn't talk.

Buttercup is seen with the other toys when Mrs. Potato Head was making a large bubble, but Rex accidentally pops it.

Again, Buttercup, along with some of the other toys, doesn't speak in this short. 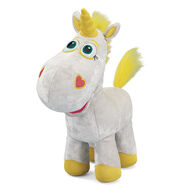 Buttercup: "The guy's just asking a question."
Mr. Pricklepants: "Well, excuse me! I am trying to stay in character!"
—Buttercup arguing with Mr. Pricklepants

Woody: "Guys! Hey! Guys! Look, I don't know where I am!"
Trixie: "We're either in a cafe in Paris or a coffee shop in New Jersey."
Buttercup: "We do a lot of improv here. Just stay loose, have fun, you'll be fine".
—Woody asks Trixie and Buttercup where he is

Woody: "Look, I just need to get out of here..."
Buttercup:"There is no way out!...Just kidding, door's right over there."
—Buttercup makes a joke and shows Woody the way out of Bonnie's room