Buy n Large (BnL) is a fictional company of the WALL•E universe.[1] WALL•E himself is a Buy n Large product. In preparation for marketing the movie, Disney purchased a domain called Buy n Large in order to create a viral Buy n Large website for promotional purposes. Now, the domain re-directs visitors to the official WALL•E website.

Andrew Stanton, in a commentary on the WALL•E DVD, stated his inspirations for Buy n Large were large corporations and how some people let consumerism govern how they run their lives. He stated that the people at Pixar had always pictured WALL•E as "a trash compactor when the idea for the movie was first discussed. He reversed-engineered the idea on why WALL•E was cleaning up the planet and why the Earth was covered in trash and the idea of what if a company was the government. And according to the commentary, one of the artists, Teddy Newton, came up with the term "Buy n Large Corporation". Stanton was intrigued by the term and he was able to truncate it to the acronym of BnL, which "tripped off the tongue real easily".

According to The History of Buy n Large, the corporation got its start as a maker of frozen yogurt.It was a small business called Buy Yogurt. Later on, the business eventually acquired Large Industries, a men's suit company. The combined entity became known as Buy n' Large (note how there once was an apostrophe after the n). The dates of Buy Yogurt's founding and its acqusition of Large Industries are unknown. However, by the year 2057, as shown on the Buy n Large website, the conglomerate became a worldwide leader in the fields of aerospace, agriculture, construction, consumer goods, corporate grooming, earth transport, electronics, energy, engineering, finance, food services, fusion research, government, hydro-power, infrastructures, media, medical science, mortage loans, pet care, pharmaceuticals, phsycotherapies, ports and harbors, real estate, repairs, retail, robotics, science/health, space, storage, super centers, super grids, travel services, utilities, and watermills. The corporation's control affected other companies as well. It seemed as though other businesses wanted BnL to buy them out, such as Headr Inc. which gave BnL control of the world news headlines.

Buy n Large contiuned to expand its efforts for control so much that by the year 2105, Buy n Large had over two million wholly owned subsidaries, governmental bodies, and health care centers. It had finally become a world leader in every conceivable field including world leadership. The Buy n Large Corporation's control over world governments was overseen by a global CEO, at the time it was Shelby Forthright. There was also a board of directors that approved Operation Cleanup. By giving the entire population on Earth (it was over 200 billion as seen in a newspaper) "the right to spend", humanity went into a state of mass consumerism which covered the entire planet in un-recycled refuse. By the time the movie WALL•E takes place, Buy n Large had built the Axiom, an executive starliner (among thousands of others whose names have not been disclosed), as a temporary refuge outside Earth while millions of WALL•E units and smaller number of huge mobile incinerators attempt to clean up the planet. Originally its cruise was only to be five years long until the BnL CEO proclaimed Earth unable to support life due to extreme toxicity. The Axiom and the rest of the starliners had to remain in space due to Directive A-113. After Buy n Large officially abandoned Earth in 2110, Shelby Forthright and all other humans supervising the cleanup had everything shut down and left. By the time the story in WALL•E takes place, Buy n Large no longer exists. It is present everywhere on Earth, the Axiom, and

presumably all the other starliners, but since the death of Shelby Forthright and his generation, it no longer truly exists in a corporate sense. All Buy n Large activity on the Axiom is the same as it was 700 years before. It still has the same advertisements, but the corporation is just run on a defunct, continuing cycle by robots. Babies are taught how Buy n Large is their "very best friend", there are BnL logos on everything, and there are still automated announcements about Buy n Large. All the holographic advertisements still tell people to consume and shop, but humans no longer consume as there are no actual products to buy, let alone money to use. It is unknown if the humans know what Buy n Large did in history.

Buy n Large purchased Buckingham Palace in London to use it as its Worldwide Office.

The BnL Headquarters (in the US) were located in New Jersey: (Buy n Large Towers, 1 Buy n Large Plaza, BnL Ave. 08012, USA). The listed 08012 zip code corresponds to the Philadelphia/Camden suburb of Blackwood. The zip code for its regional office for the Americas, in Largefield, NJ (08657), however, is fictitious.

A website for Buy n Large was created by Pixar on July, 25 2007 in order to promote the movie WALL•E. At the time, it was the world's largest, most extensive viral marketing website.[2] The site described WALL•E's universe and offered access to a real store through Zazzle.com where Buy n Large products, mostly apparel, could be be purchased on line.

The Buy n Large website is no longer online and now simply redirects to the WALL•E page on the Disney website. Though most of the site was taken down, the BnL store (zazzle), BnL World News, and the BnL Disclaimer all remain operational. Also, a video promoting Buy n Large was posted to advertise the website: [1]

Shop Together, Happy Together.

Some of the BnL brands. (As well as BnL beta logos.)

The BNL Headquarters Seal as seen in the ending of Wall-e game. 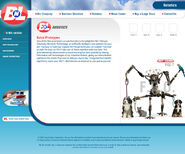 The early comps of BnL - The PEE-T solution

Retrieved from "https://pixar.fandom.com/wiki/Buy_n_Large?oldid=87794"
Community content is available under CC-BY-SA unless otherwise noted.