Monsters University
Party Central
Carla Delgado is a character in Monsters University. She is an octopus-like monster with pink skin. Carla is a member of the Slugma Slugma Kappa sorority, of which she appears to be the leader.

Carla first appears on the first party at the JOX fraternity house. She is always seen together with her sorority, proving that their merit is teamwork. At the start line of the Toxicity challenge of the Scare Games, she is seen giving a last pep talk to her sisters. ΣΣK had nearly beaten Oozma Kappa in the second event of the Scare Games, but Carla and her team were eliminated when they were caught by the Librarian and thrown into the river. 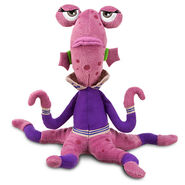 Add a photo to this gallery
Retrieved from "https://pixar.fandom.com/wiki/Carla_Delgado?oldid=207495"
Community content is available under CC-BY-SA unless otherwise noted.