Darrell Cartrip: "There's smoke on the casino bridge!"
David Hobbscap: "Oh, no!"
Brent Mustangburger: "It's Carla Veloso, the Brazilian race car!"
—The announcers after Carla Veloso's engine gets blown up.

Carla Veloso is a character in Cars 2.

Carla hails from Rio de Janeiro, Brazil where she’s been known to dance the night away at the famous ‘CAR-nival’ but nothing makes her happier than being on the racetrack. Carla was drafted into the 24-hour endurance racing team in Europe after setting a new track record on her local circuit. Now, in the World Grand Prix, this proud Brazilian Le Motor Prototype racer, wearing #8, is the only female in the field.

She is the only female in the World Grand Prix. She is seen in all three races and also in the one at Radiator Springs. In the Tokyo race, she finishes in 3rd place. In the Italy race, she is the first car hit by the lemons' radiation beam. She gets fixed though and gets back up to race. In London, her pit was next to Jeff Gorvette's pit on the left. She has no lines in the film.

Carla is playable in Cars 2: The Video Game, where she is trained in spy missions by Finn McMissile and Holley Shiftwell at C.H.R.O.M.E., along with doing races with her friends. In "Lightning the Mood" before the first race in Radiator Springs, Mater welcomes Carla, Jeff and your player (Lightning McQueen if you're playing as Mater, Jeff or her), telling them that they should have the right speed to outrun Frank. Wondering who Frank is, Carla notes him to sound "strong and handsome", to which Mater admits that she "got the strong part right". Finally, everyone completes all the simulations, although Francesco is not able to master all the missions.

Unlike in the movie, she has a big speaking role.

In order to play as Carla, the player has to unlock her by leveling up to Clearance Level 2. She is one of the medium class racers, having more speed than power.

Carla is a non-playable character in the Cars Play Set for the first Disney Infinity game. In the storyline, Luigi invites her to a race consisting of Radiator Springs' townsfolk, Francesco, Todoroki, Chick Hicks and The King. Occasionally, she is one of the opponents in the regular and battle races that the player takes part in.

While she is in the play set itself, she is not available in the Toy Box, as she is not in the category of cast member toys. This also marks her only appearance in the Disney Infinity series, apart from a picture seen in Ramone's House of Body Art.

Carla is one of the playable characters in the mobile game Cars: Fast as Lightning. In the game, she builds her own race track as part of McQueen's extravaganza. Carla is unlocked when the player beats her while playing as Miguel Camino in his tournament races. Unlocking Carla also unlocks her race track and pit, the latter placed as a building in Radiator Springs. Occasionally, she sleeps in her pit, usually when the player is not around. She also has four paint jobs that the player can use: Carnaval, Quente, ICE, and Neon Carla. These are unlocked by using gems, or earning stickers in practice races on her track.

Retrieved from Stitch Kingdom via the Web Archive.[1]

Carla Veloso at the Tokyo Party in the Brazilian version 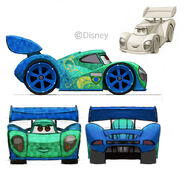 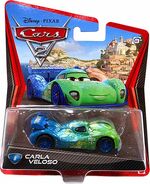 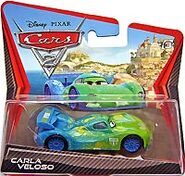 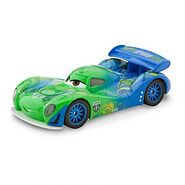 A Carla Veloso model from the Disney Store 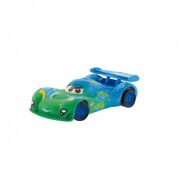 A wooden model of Carla and Cruz

Carla as a Micro Drifter
Add a photo to this gallery

Retrieved from "https://pixar.fandom.com/wiki/Carla_Veloso?oldid=228678"
Community content is available under CC-BY-SA unless otherwise noted.