Carlo Maserati is a cameo character in Cars 2.

"Carlo Maserati is one car you can't judge by his buttoned-up appearance. The eldest of seven cars, Carlo engineered his own performance modifications at a very young age. Off he went, speeding into new adventures and power-sliding out of them. His only other passions were the love of fast, curvy cars and the finest olive motor oil. You'd never know it by looking at him because on the surface he looks street legal and civilized, but under the hood there's enough horsepower to throttle you."[1] 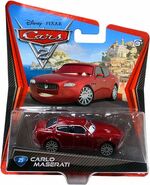 Retrieved from "https://pixar.fandom.com/wiki/Carlo_Maserati?oldid=211101"
Community content is available under CC-BY-SA unless otherwise noted.