Beth Behrs
Carrie Williams is a character in Monsters University. She is the fearless leader of the Python Nu Kappa sorority, who goes against the Roar Omega Roar fraternity in the Scare Games. She is identical to her sisters physically, and differs only in her coloration. She is the reddest of the PNKs, and the only one who has bright red hair combined with pink skin.

"Fearless leader of the Python Nu Kappa sorority, Carrie Williams commands the respect and attention of the house with a simple flash of her burning red eyes. The youngest of eight siblings and the only girl, Carrie relishes being in a sorority and the relationships with her PNK sisters."[1] 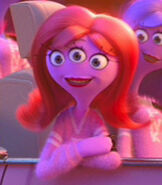 Britney's scare card with Carrie's name on it. 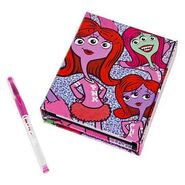 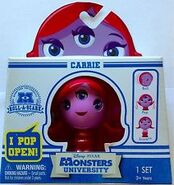