Cars: The Video Game is a video game that was released in June 2006. It was the first Pixar video game based upon the movie. The game takes place after the movie, as players take the role as Lightning McQueen, as he prepares for the next Piston Cup season, as well as racing new competitors. An Xbox 360 version was released on October 23, 2006 in North America, November 17, 2006 in Europe, and November 23, 2006 in Australia. Also, the Wii version was released as a launch title for the system on November 15, 2006. A version for the PlayStation 3 was cancelled and never released.

Returning to the Game

New to the Game

Corey Burton
Fletcher is a polite British car, who "hopped across the pond" to Radiator Springs alongside his colleague Gerald to challenge Lightning to a race. He speaks with a British accent. He appears to be a 1954 Jaguar XK120SE.

Later, in Tailfin Pass, he expresses his opinion on racing in America, saying it is "so myriad in its challenges," to Sonny and Vince, much to their annoyance.

Fletcher later returns in Cars: Mater-National Championship, though his role is a lot smaller. He appears in various races, but he only has one cut-scene appearance, which he does not speak in. On some versions, his paint job is a lighter shade of green and the number 3 on one of his sides is missing.

Steve Purcell
Gerald is Fletcher's colleague. He seems to be shy because he hardly ever speaks and sometimes hides behind Fletcher. He appears to be a fictional combination of a 1975 Porsche 911 Turbo and a Jaguar XK-E.

Like Fletcher, Gerald returns in Mater-National, but with a much smaller role as he does not appear in any of the cut-scenes, but in various races.

Alex Reymundo
El Guapo is a cocky Spanish car, who drove to Radiator Springs alongside his friend Papo to challenge Lightning to a race, like Fletcher and Gerald. He thinks that his various gold areas such as his rims will help him win races. He also speaks with a Spanish accent. His basis is currently unknown, his license plate simpily reads "GUAPO".

Rafael Sigler
Papo is El Guapo's friend. He never speaks in the cut-scenes but seems to be cocky like his friend. He can only speak Spanish. He appears to be a 1947 Chevrolet Coupe.

Bill Farmer
Tommy Joe is Mater's cousin. He is one of the generic demolition derby cars who race at the Rustbucket. His number is 83 and his paint job could ressemble an American Flag with no blue or stars.

When Lightning first meets Tommy Joe, he bumps into him. Mater explains that as his way of saying hello.

Tommy Joe returns in Mater-National. When Mater arrives at the Rustbucket, he is surprised to notice that his cousins are not practicing for the race. Tommy Joe explains that they have spent the last hour watching Emma. When Mater notices Emma coming towards them, he asks his cousins to, "Act natural," resulting in them piling up on him. He also appears in various Rustbucket Races.

Tommy Joe also returns in Cars: Race-O-Rama, but he has no cut-scene appearances. He only appears in various Rustbucket Races.

Bill Farmer
One can often find Buford with his cousins Mater, Judd and Cletus. His favorite pastime is to try to find wheel covers to add to his collection, which already has over a hundred. But he also loves to spend quality time with his cousin at the lake. He sips cold engine oil, casts his fishing line in the blue water and throws a well-deserved nap. Although he never catches anything, his happiness is complete. Although he is a video game-only character, he had a diecast release, where he was numbered 7 Instead of 20.

Buford returns in Mater-National in which he appears in various Rustbucket Races.

Unknown
One night, Mater saw Cletus honking his horn to the Tractors and waking them with a startle. He found it so funny that he decided to accompany him next time. After the departure of his cousin, he wanted to wake up one last tractor and approached his prey by stealth, until noticing that the tractor in question was none other than Frank! Since then, nothing and no one will force more to play this game. He also had a die-cast release.

Bill Farmer
Lewis is one of Mater's cousins, who races in the Rustbucket Racing Series. His number is 81, he has a lot of dents from being in the Demolition Derby, he seems to be a bit childish, and doesn't have very good English.

Lewis returns in Mater-National and Race-O-Rama in which he appears in various Rustbucket Races.

Bill Farmer
Like his cousin Mater, Judd has a very special talent. In particular, he is able to "ski", that is to say to ride on two wheels side. One night he and Mater play tractor tipping as it was fun to them, but when Frank was involved, they got caught in a barn and a grain silo. Judd has managed to escape by "skiing" between the two buildings. Judd and Mater then spun, but they promised to return as soon as possible. He also had a diecast release, in which his name was spelled "Jud".

Judd appears racing in the Rustbucket Race-O-Rama in Cars: The Video Game. He also returns in Mater-National where he appears in various Rustbucket Races.

Unknown
Zeke is Mater's Cousin, who races in the Rustbucket Racing Series at Ornament Valley. He was later jealous of Mater. He seems to be less intelligent than the other cousins.

He returns in Mater-National and Race-O-Rama where he appears in various Rustbucket Races.

Jerry DeCapua
Vince is one of the four cars from the town "Queens", who drove to Radiator Springs alongside his friends Barry, Sonny, and Lenny to challenge Lightning to a race in Ornament Valley. He appears to be a 1971 Pontiac Firebird. He usually is confident and arrogant, but will usually act timid when on live TV.

Vince returns in Mater-National, but with a much smaller role. Besides appearing in various races, he makes one cut-scene appearance where he and Sonny are in a race with Koji and Otto, but are shown to be slow compared to them. Vince points out that they might be in the wrong race.

Quinton Flynn
Sonny is one of the four cars from the town "Queens", who drove to Radiator Springs alongside his friends: Vince, Barry and Lenny. He does not speak in the game; he speaks only in Cars Mater-National. Sonny is a 1971 Plymouth GTX 440+6, he is extremely mean, as he hits his friend Barry's hood without a reason. He is a very unique character whose 3D model usually differs in every version. He also has an unusual spoiler where the folds face up instead of down.

Rob Izenberg
Barry is one of the four cars from the town "Queens", who drove to Radiator Springs alongside his friends: Vince, Sonny and Lenny to challenge Lightning to a race in Ornament Valley. He appears to be a 1970 Plymouth Road Runner. Barry takes care of his hood and doesn't like it if someone hits it. He also is often hit by Sonny. He is rather spineless and dumb.

He returns in Mater-National and appears in the cut-scene for the first race where he overhears Lightning, Doc, Philip and Fred talking about a race and decides to join. Besides that, he mostly appears in various races.

Greg Baldwin
Lenny is one of the four cars from the town "Queens", who drove to Radiator Springs alongside his friends: Vince, Barry and Sonny to challenge Lightning to a race in Ornament Valley. He never speaks in cut scenes and, unlike his friends, races only once. Lenny is a 1969 Chevrolet Camaro. He can only say "Good" and "Not Good."

He returns in Mater-National and appears in a lot more races. However, he has no cut-scene appearances.

Steve Purcell[1]
Count Spatula is a monster truck who challenges Lightning to a race. He threatened to squash Lightning McQueen like a pancake. When Lightning gets turned into a monster truck, the Crippler and Ginormous got scared, but Count Spatula said McQueen needed the mental fortitude. He is the only new character to be playable in the game. His name is a portmenteau between "Count Dracula" and "Spatula".

Count Spatula later returns in Mater-National and appears in the first and second Monster Truck Waypoint races. In Race-O-Rama, he appears in all five Monster Truck Races, though he does not appear at all on the PlayStation 2 version.

Joel McCrary
Ginormous is a monster truck who wanted to race against Lightning. When Lightning was turned into a monster truck he and the Crippler got scared. He doesn't speak, he only makes screaming noises.

Ginormous returns in Mater-National where he appears in the first and third Monster Truck Waypoint races. The same goes for Race-O-Rama in which he is in all five Monster Truck Races, except for the PlayStation 2 version where he does not appear at all.

E.J. Holowicki
The Crippler is a hospital monster truck who challenges Lightning to a race. He and Ginormous got scared, however, when Lightning was turned into a monster truck.

He returns in Mater-National and appears in the second and third Monster Truck Waypoint races in Story Mode. He also appears in Race-O-Rama in all five of the Monster Truck Races. He is the only member of Count Spatula's gang to appear on the PlayStation 2 version.

They usually act friendly and say hello to Lightning whenever he passes by. However, they can get angry or frightened whenever the player decides to bump into them or zoom past them at high speeds.

The tourists return in Mater-National with the same role they had in the original game. The same goes for Race-O-Rama. This time, an eighth design, Pick-Up Truck, is introduced and due to a glitch, they behave differently. They drive slower and can get angered or frightened when Lightning is not even moving. 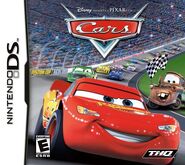 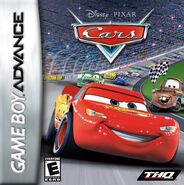 PlayStation 2 version.
Add a photo to this gallery

Retrieved from "https://pixar.fandom.com/wiki/Cars:_The_Video_Game?oldid=210334"
Community content is available under CC-BY-SA unless otherwise noted.