Cameos, in-jokes, re-used animation and other trivia from Cars 2. 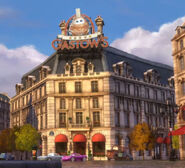 A billboard in allusion to Harryhausen's in Tokyo

Advertisement for the "Lots-O'-Huggin' Bear Car"

"The Incredimobiles" at Radiator Springs

French poster of "The Incredibles" in Paris. 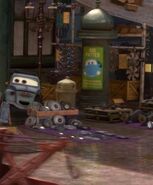 Poster for A Bug's Life in Paris 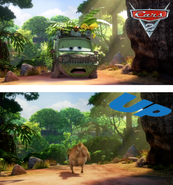 Miles Axlerod emerges from the jungle from Up

A113 in the number of the mystery engine

Lasseter Way in London, as well as a car-ified version of pedestrian lights at traffic lights

Vitaly Petrov on a postcard in the end credits

Luxo, Jr. and Pixar Animation Studios in the credits.

Luxo, Jr. on an advertisement for "Air Luxo" in the credits.
Add a photo to this gallery

Retrieved from "https://pixar.fandom.com/wiki/Cars_2_Trivia?oldid=199288"
Community content is available under CC-BY-SA unless otherwise noted.