Cars 2
Cartney Brakin is a small car (presumably a child) and a huge Lightning McQueen fan.

He is seen playing with an RC McQueen toy inside a store full of McQueen merchandise, during the Tokyo arrival scene. Upon meeting McQueen and Mater, he faints with excitement to have his idol in front of him.

Cartney, McQueen and Mater in the store 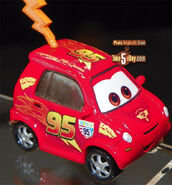