Cars 2
Cartney Carsper is a cameo character in Cars 2.

In the film, Cartney Carsper is a race fan seen in the crowd at the second World Grand Prix race in Porto Corsa, near Pope Pinion IV. He is a huge fan of Lightning McQueen. 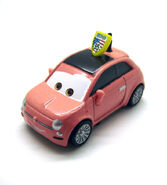