Mater: "Excuse me. What are you selling?"
Celine: (she opens her eyes) "Headlights, monsieur, headlights?"
Mater: (gasps) "What in the... Ahh!" (drives away)
Celine: "Two for one! I give you good price!"
Mater: (still driving away) "It's OK! I'm good!"
—Mater meets Celine Dephare.

Celine Dephare (pronounce "say•leen duh•far") is a minor character in Cars 2. Her name means Celine "of headlights" in French.

Celine's eyes are in her headlights, the car part she coincidentally sells in Paris at the Marché Aux Pièces. When Mater strolls into her stall, her unusual appearance scares him away.﻿ 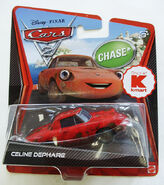 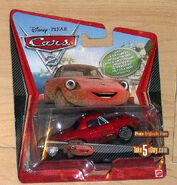 Add a photo to this gallery
Retrieved from "https://pixar.fandom.com/wiki/Celine_Dephare?oldid=229614"
Community content is available under CC-BY-SA unless otherwise noted.