"Adventure is out there!"
—Muntz's famous catchphrase

Charles F. Muntz is the main antagonist of Up. He is voiced by the late Christopher Plummer.

Muntz was a famous explorer and adventurer in the '30s that Carl and Ellie admired when they were kids. He flew around the world in his flagship airship, The Spirit of Adventure, collecting many rare specimens that are now preserved in the most prestigious museums. He is an avid dog lover and inventor, being able to train them to do practically anything, and has invented devices that translate their thoughts into speech. He is the master of many dogs, including Dug (who is now Carl and Russell's pet), Alpha, Beta, and Gamma.

Muntz is first seen in a newsreel titled Spotlight on Adventure when a 9-year old Carl is visiting the movie theater. It is explained that he has recently returned from a lost land called Paradise Falls, having completed a year-long survey. Muntz is shown presenting his new-found treasure: a skeleton of a 13-foot tall tropical bird, whom he calls "The Monster of Paradise Falls."

However, scientists claimed the specimen to be a fake, and as a result, Muntz was removed from the National Explorers Society. Dishonored, Muntz declared in front of an oversized crowd that he will go back to Paradise Falls to get the bird, vowing that he would not return without a living specimen to prove himself right. Nothing was ever heard from Muntz following his departure, and soon he was all but forgotten.

Unfortunately, the countless years that Muntz spent at Paradise Falls corrupted him, his obsession driving him into insanity. Muntz became ruthless and paranoid, determined to do anything to obtain the bird and believing that anyone who came to Paradise Falls was after the bird to steal his glory, presumably leading him to kill anyone he met.

When Muntz comes across Carl and Russell, he is touched by Carl's admiration and invites them to visit his aircraft, but it doesn't take long before his true nature reveals itself, when he learns that his guests have befriended the bird. He thinks they want to steal it and is ready to kill them to retrieve it.

A chase begins, and Muntz succeeds at last in capturing the bird. Russell and Carl attack The Spirit of Adventure, and a battle ensues. In a final fight, Muntz breaks into Carl's house with a Sharps Rifle. Carl lures Kevin out of the house with a chocolate bar and knocks the gun out of Muntz's hands in the process. In the last resort measure, Muntz leaps out of the window after them and tries to grab Kevin's tail feathers.] But Muntz's foot gets tangled in some balloon lines which detach from Carl's house, leaving the explorer to fall thousands of feet below to his death.

Muntz is mentioned by Alpha in the short as "Master".

Muntz is mentioned in the fifth short of the series, with Russell unenthusiastically expressing gratitude for his invention of the translator collars.

At the peak of his career, Muntz was a charismatic, rational and daring young man whose spirit inspired countless fans to look for adventure.

However, Muntz's quest for the bird that caused his disgrace destroyed him, as his search turned to obsession. Now a ghost of his former self, he became a heartless man, consumed by bitterness, paranoid to the extreme, and convinced that anyone who comes across him is after the bird. It is implied he crucified two explorers already, and was intending to do the same with Russell and Carl. It is shown that Muntz's obsession is such that he doesn't care anymore for the rest of his collection, showing no reluctance to eliminate some of his unique specimens while he is trying to take down Carl.

Muntz largely serves as a parallel to Carl. He was a man broken because he lived obsessed with his former existence and desperately trying to relive it at any cost, showing what Carl could have become, had he not learned to accept the loss and move on with his life.

Muntz: "You know, Carl, these people who come here, they all tell pretty good stories. A surveyor making a map... a botanist cataloging plants... an old man taking his house to Paradise Falls... and that's the best one yet. I can't wait to hear how it ends."
—Muntz to Carl on his victims

Muntz: "Does anyone know where they are?!"
—Muntz shouted at the loudspeaker in the cockpit of the Spirit of Adventure when the dogs kept talking

Muntz: "Grey Leader? Take down the house."
—Muntz orders his dog pilots to take down Carl's house and Russell

Muntz: "Enough! I'm taking that bird back with me...alive...or dead!"
—Muntz, his last words as he fights Carl, destroying his prized possessions with a sword

A Charles F. Muntz poster that Ellie had

Muntz with his dog Alpha 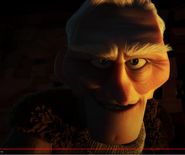