The Charred Rag Doll is a minor character in Toy Story. She is a one-eyed rag doll (similar to Janie and Sally), possibly an explosion victim. Once belonging to Hannah, the doll was abused by Sid and abandoned in his sandbox (along with the Red Toyota Hilux). The Charred Rag Doll also repeatedly says "Mama!" so she may be a talking doll. Her voice is provided by Danielle Judovits.

When Sid's toys (led by Woody) plan to teach Sid a lesson and stop him from blowing up Buzz Lightyear, the mutant toys disperse throughout Sid's backyard to wake up other broken toys. Pump Boy wakes up the Charred Rag Doll, who comes alive and walks towards Sid with the rest of his toys to prove they're alive. 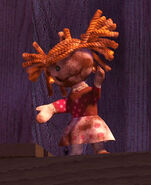