Monsters University
Party Central
Chet "The Claw" Alexander is the tertiary antagonist in Monsters University. He is a dark red crab-like monster with one eye. He also talks with a slight lisp. He is a yes-monster member of the Roar Omega Roar (ROR) fraternity, and one of Dean Hardscrabble's henchmen.

"Chet Alexander is an overzealous sidekick to ROR president Johnny Worthington. He’s enthusiastic, excitable and in 100 percent agreement with whatever Johnny says. If Johnny wants someone mocked, Chet is first in line to mock them. If Johnny wants to get a laugh, Chet will be in hysterics before the joke is done. And if Johnny wants Chet to stop smothering him, well then Chet will try his best to do that, too."[1]

Chet Alexander has minor appearances in the film. He appeared when Johnny Worthington offered Sulley to join the ROR fraternity. Later in the movie, he appears at the end of the Toxicity Challenge when Oozma Kappa came in last. During the scare simulation, he further shows his devotion to Johnny when he screams, "Johnny, you're my hero!" At the end, he appears with Johnny, trying to bring Sulley back on the team.

Chet Alexander re-appears in the short film Party Central. He is briefly seen partying around the Roar Omega Roar house. After the ROR house is completly deserted, he is shown having a blast outside the Oozma Kappa house, commenting "this is the best party ever!" 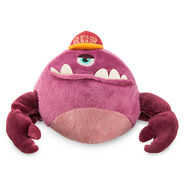 Retrieved from "https://pixar.fandom.com/wiki/Chet_Alexander?oldid=135683"
Community content is available under CC-BY-SA unless otherwise noted.