Pixar Wiki
Register
Don't have an account?
Sign In
Advertisement
in: Trivia, Culture, A Bug's Life Culture,
and 5 more
English

The Chinese Food Box is a folded paperboard container, traditionally with a handle made of solid wire, used to package take-out food. One such box model first appeared in A Bug's Life as a "Chinese Cabinet of Metamorphosis" used by Manny as part of his circus act. This precise box model made cameos in several subsequent Pixar films.

The model recurrent in Pixar films is characterized by its pagoda drawing in red ink, printed on both the front and back sides. It depicts a flat, one-floor pagoda with one large, round window, a balcony, and two lanterns. It is surrounded by four Chinese words （山珍海味, a Chinese idiom literally meaning "delicacies from the mountains and the sea"）. Furthermore, the shape of the hook on the front lid is consistent in every appearance. On the top of the lid is written "Thank You", also in red ink.

Some Chinese food boxes are found in Harryhausen's in Monsters, Inc.. However, their pagoda drawing is fully different, and therefore they do not really constitute a cameo of the box from A Bug's Life. Nevertheless, the box itself is the same as in other appearances (e.g. the top lid's hook design is matching). 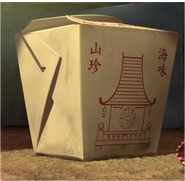