Chunk: "He ain't the sharpest knife in the... uh.. place where they keep the knives!"
Sparks: "Neither are you, Chunk!"
—Sparks mocking Chunk (also the only time in the film where Chunk is mentioned by name)

Chunk is one of the supporting antagonists in Toy Story 3, but in the end is reformed.

Chunk is a rock-like toy from Sunnyside Daycare. He has protective shoulder spikes, poseable oversized limbs, and fists ready to smash anyone who gets in his way. He also has a hidden head spike which when pressed down switches his facial expression from friendly to fierce. He starts out as one of Lotso's henchmen, but in the end is reformed. When Andy's toys first arrive at Sunnyside, he shakes hands with Jessie. Later in the film, Buzz sees Chunk and Twitch in the hallway and follows them. Afterwards When he and Sparks are putting Jessie in a cell later in the film, she kicks them both in the face.

In the end credits, when Sunnyside is turned from a prison into a paradise by Barbie and Ken (who are now the new leaders of Sunnyside after Lotso's defeat), Chunk is shown handling a rough playtime with the toddlers in the Caterpillar Room, later switching places with Twitch so Chunk can rest.

Sparks elevating himself up 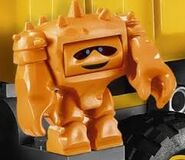 The Lego version of Chunk
Community content is available under CC-BY-SA unless otherwise noted.
Advertisement